Items related to Learning Aid for use with Basic Marketing

Learning Aid for use with Basic Marketing 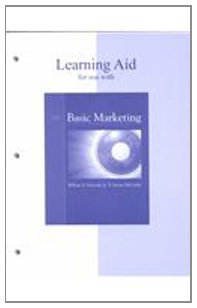 This work offers a thorough integration of the latest marketing themes, topics and examples, to focus on management decision-making in marketing, and provide integrated coverage of special topics such as technology, ethics, international perspectives, relationship marketing and services. This book develops and presents the "Four Ps" framework when describing the components of the marketing mix (product, price, place, promotion). Features include: integrated coverage of how developments in e-commerce are impacting marketing thinking and marketing action as well as a comprehensive discussion of marketing lessons learned from both the successes and failures of companies, including the dot.coms, in the new economy; coverage of the important new perspectives that evolve from customer relationship management (CRM) strategies and tools, and how they relate to concepts such as customer equity, customer acquisition and retention costs; and updated Internet exercises that are integrated throughout the text, along with links to companies referenced in the book.

Stanley J. Shapiro received his B.A. from Harvard and his MBA and Ph.D degrees from the Wharton School of the University of Pennsylvania. His doctoral dissertation was a 'politics of distribution' study focusing on the Ontario Hog Producers' Marketing Board. He then taught at Wharton for three years before moving to Montreal to join first, an advertising agency and then a marketing research firm. In 1967, he became an associate professor at the McGill Graduate School of Business. He became a full professor in 1972 and between 1973 and 1978 he was Dean of the McGill Faculty of Management. In 1981, he became a Professor of Marketing at Simon Fraser University where he was also Dean of Business Administration between 1987 and 1997. Dr Shapiro has also been a Visiting Professor at Queen's University, Bentley College and Royal Roads University. Upon his retirement from Simon Fraser University in 1999, he was appointed Professor-Emeritus but continues to regularly teach “online” for that university. Dr. Shapiro is a Past Chair of the Canadian Federation of Deans of Management and Administrative Studies. During his career he has conducted numerous evaluations of BBA, MBA and Ph.D programs at other Canadian universities. He currently serves both on the Province of British Columbia’s Degree Quality Assessment Board and the Academic Council of the BC Open University. Dr. Shapiro is also a former editor of the Journal of Macromarketing and was an Editorial Board member of the Journal of Marketing for over thirty years. He continues to serve on the Editorial Boards of the Journal of Macromarketing, the Journal of Global Marketing, and the Journal of the Teaching of Business Ethics. Dr. Shapiro is a past president of the Montreal chapter of the American Marketing Association and a former National Director of that organization. Also, he is both a Past Governor and a Distinguished Fellow of the Academy of Marketing Science. He has published extensively in areas ranging from marketing history to the financial dimensions of marketing management. Much of his consulting has been public sector-related including such major projects as the first marketing study ever conducted by Canada Post and active involvement in the Canadian government's Conserver Society initiatives. Between 1987 and 1993, Dr Shapiro was also an elected School Trustee in Burnaby, British Columbia.

1. Learning Aid for use with Basic Marketing

2. Learning Aid for use with Basic Marketing

Book Description McGraw-Hill Higher Education. Paperback. Condition: Fair. A readable copy. All pages are intact, and the cover is intact. Pages can include considerable notes-in pen or highlighter-but the notes cannot obscure the text. At ThriftBooks, our motto is: Read More, Spend Less. Seller Inventory # G0072430095I5N00

3. Learning Aid for use with Basic Marketing

Book Description McGraw-Hill/Irwin, 2001. Condition: Good. A+ Customer service! Satisfaction Guaranteed! Book is in Used-Good condition. Pages and cover are clean and intact. Used items may not include supplementary materials such as CDs or access codes. May show signs of minor shelf wear and contain limited notes and highlighting. Seller Inventory # 0072430095-2-4

4. Learning Aid for use with Basic Marketing

5. Learning Aid for use with Basic Marketing

6. Learning Aid for use with Basic Marketing