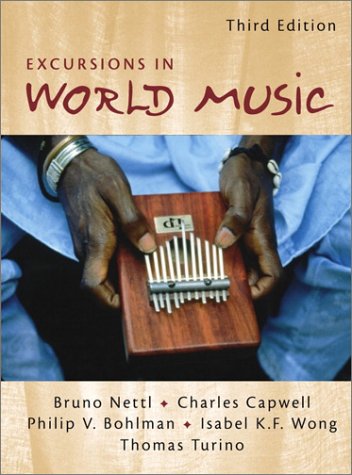 This dynamic book takes readers on a vivid exploration into the major musical cultures of the world by first presenting a lively vignette of a musical occasion, and then placing that occasion in the context of a general description of the society and musical culture. Each chapter features a specific area of the world, written by a scholar who is a specialist in that particular geographical area. Featuring the musical cultures of such fascinating lands as India, the Middle East, Indonesia, Sub-Saharan Africa, and Latin America, it covers older rural and classical musical traditions—as well as newer urban-popular forms within a given society. For anyone who appreciates music—and is listening for a good understanding of each culture's ideas of what music is, what its powers are, how it relates to other aspects of life, and how it reflects important things about its people and their view of the world.

Preface The authors are pleased to present this third revised edition of Excursions in World Music to its expanding audience with the hope that the changes made will further increase its informativeness and utility. After the major revisions of the second edition, we have not felt the need for a fundamental overhaul, but several of the book's chapters have been rewritten to bring them up to date and to provide a greater variety of information. In particular, the chapters on music in China (4), in the Middle East (3), and among Native Americans (10) have been extensively altered and expanded with more attention given to popular music and contemporary developments, while the introductory essay on "Studying the World's Musical Cultures" now incorporates a broader discussion of the field of ethnomusicology.

Essentially, however, the book has remained, in its orientation, structure, and basic content, what it was originally intended to be—a set of chapters, by scholars writing with conviction and a sense of devotion, about cultures in which they have had substantial field experience, providing information and interesting syntheses of the musical cultures of the world. We have done this in order to stimulate understanding and engender respect. ACKNOWLEDGMENTS

We are grateful to Melinda Russell (Carleton College) for editorial help with the second edition and to Margaret Sarkissian (Smith College) for preparing the teacher's guide. We also wish to express our gratitude for the numerous helpful suggestions provided by anonymous readers and loyal users of the book alike.

This introductory text offers readers a glimpse into the major musical traditions of the world by first presenting a lively vignette of a musical performance, followed by a general description of the society and its music. Each chapter features a specific area of the world, and is written in friendly non-technical language by a scholar who is a specialist in that region.

Excursions in World Music, 3/e gives students a concrete grasp of the rich diversity of the world's music by highlighting the most important social and musical aspects for each culture. The opening chapter provides an introduction to ethnomusicology and the study of world music by Bruno Nettl, one of the leading scholars in the field.

New features to this edition include enlarged chapter-opening maps, which will help students focus on the regions discussed as well as major revision to Chapter 1, Introduction, Chapter 3, Music of the Middle East, Chapter 4, The Music of China, and Chapter 10, Native American Music. More depth and coverage is provided in these chapters than in previous editions, giving students a broader perspective on these musical traditions.