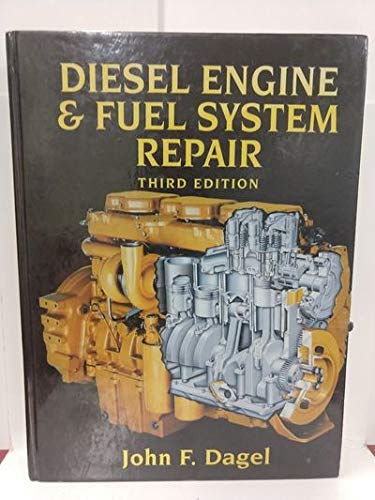 This cutting-edge manual incorporates the latest in diesel engine technology, giving readers a solid introduction to the technology, operation, and overhaul of heavy duty diesel engines and their respective fuel and electronics systems.

Provides critical analyses on the operation, maintenance, service and repair of all types of fuel systems, clearly describing both mechanical and electronic fuel systems and governors. Presents a thoroughly updated chapter on electronic fuel injection, with detailed discussions on current operation, diagnostics, and troubleshooting of all major systems, such as Caterpillar, Cummins, Detroit Diesel, Mack, and Volvo. Analyzes electronic fuel injection and governors to meet diagnostics/ troubleshooting requirements, and integrates the latest technological information throughout.

Updated to incorporate the latest in diesel engine technology, this leading text provides an introduction for the technology, operation, and overhaul of heavy duty diesel engines and their respective fuel and electronics systems.

Robert N. (Bob) Brady has been involved in the automotive, heavy-duty truck/bus, and equipment field since 1959, having served a recognized indentured apprenticeship as both an automotive and heavy-duty truck/bus and equipment technician. He is a certified automotive, commercial transport, and heavy-duty equipment technician. A graduate of Stow College of Engineering, where he majored in the Thermodynamics of Heat Engines, he holds a degree in Mechanical Engineering Technology. He also holds a degree in Adult Education.

His experience includes positions as a shop foreman and service manager for a number of major heavy truck companies and OEMs, as well as a Fleet Maintenance Superintendent with a large North American truck fleet. Other experience includes positions as Manager of National Technical Training, Canada; Sales Application Engineer; Field Service Engineer for Detroit Diesel Corporation; Diesel Engineering and Diesel Mechanic /Technician college instructor; and Department Head of the program at Vancouver Community College, where he also served a two-year term as President of the Faculty Association.

He is a full member of SAE International (Society of Automotive Engineers), for which he has served as the chair of the British Columbia Section. Under his leadership in 1989-90, the section received an SAE Award of Merit for outstanding technical meetings. At the International level of SAE, he served three years on the worldwide Sections Board as Vice-Chair and then Chair. Other activities in SAE at the Sections Board level included chairing the Executive Committee, the Administrative Committee, the Brazil Ad Hoc Committee, and the International Sections and Affiliates Committee. He has also served as a member of the Sections Evaluation and Awards Committee. He served as a Regional Coordinator, where he worked with the B.C., Alberta, and Manitoba Sections in Canada, and was an acting RC for the NW /Spokane-Intermountain, Washington, and Oregon sections. He also served as a member of SAE's Total Quality Committee. He was elected to SAE's worldwide International Board of Directors, serving from 1994 through 1996, and was one of two SAE board of directors appointed to the Ad Hoc Committee that in March 1996 initiated the development and organization of the STS (Service Technicians Society), an affiliate of SAE International.

In 1987 he established his own company, HiTech Consulting Ltd., which specializes in technical training program design/implementation aimed specifically at heavy-duty, on- and off-highway equipment. He has delivered specialized training courses for engineers, service technicians, and maintenance personnel at a number of companies and corporations. Other functions include fleet maintenance and failure analysis programs as well as equipment specing. He has appeared as an expert witness in a number of cases involving patent infringement and engine/ equipment failure.

He is the author of fourteen textbooks for Prentice Hall dealing with automotive fuel injection and electronics/computers, diesel, and heavy-duty trucks. A member of the TWNA (Truck Writers of North America), he writes monthly technical/maintenance articles for two of Canada's major newspaper/magazines: Trucknews, Canada's National Trucking Newspaper and Equipment Buyer's Guide, and Grainews, a national farmer's monthly newspaper distributed in both Canada and the United States, where his monthly articles deal with truck and equipment maintenance.