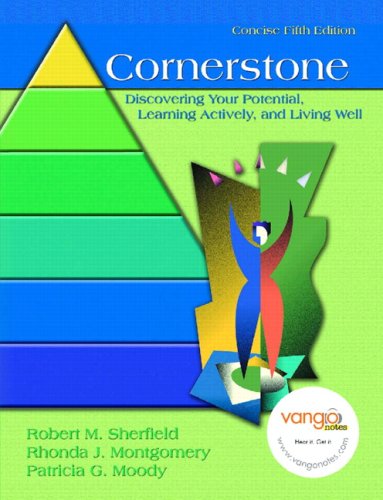 This updated book offers one of the most complete, concrete student success programs in the country, with suggestions and strategies for academic success and personal improvement including goals, change, and career/life planning. Visually stunning, conversationally written, and student-tested, the book provides learners with a variety of solutions to almost any problem faced in the first year of college and beyond. Chapter-opening vignettes–inspired by students across America– contain advice from professionals in “the world of work” such as managers from General Motors, Wal-Mart, Disney, Marriott, Bank One, and Waddell and Reed. These vignettes enable readers to see strategies and success in action and in real life. Chapter topics discuss change, managing time and money, building active reading and comprehension skills, learning styles, empowering memory, critical and creative thinking skills, and much more. For anyone embarking on a college education, or interested in bettering themselves through the “self-help” genre.

Finally, a textbook that actually uses reading and critical thinking strategies rather than just talking about them.  This compelling fifth edition of the concise Cornerstone: Discovering Your Potential, Learning Actively and Living Well focuses strongly on self-responsibility and active learning.  It effectively uses and underscores the importance of SQ3R to student success.

In addition, the extraordinary supplemental resource package has been expanded to better fit faculty and student needs.

Additional Support — in and out of the classroom...

An award-winning educator, Robb was named Educator of the Year at the Community College of Southern Nevada. He twice received the Distinguished Teacher of the Year Award from the University of South Carolina Union, and has received numerous other awards and nominations for outstanding classroom instruction and advisement.

Robb’s extensive work with student success programs includes experience with the design and implementation of these programs—including one program that was presented at the International Conference on the First-Year Experience in Newcastle upon Tyne, England.  He has conducted faculty development keynotes and workshops at over 250 institutions of higher education across America.  He has spoken in 42 states and several foreign countries.

Robb’s interest in student success began with his own first year in college. Low SAT scores and a low high school ranking denied him entrance into college. With the help of a success program, Robb was granted entrance into college, and went on to earn five college degrees, including a doctorate.  He has always been interested in the social, academic, and cultural development of students, and sees this book as his way to contribute to the positive development of first-year students across the nation.  Visit www.robertsherfield.com.

Rhonda J. Montgomery has been teaching, writing and doing research in the area of the first-year orientation programs for the past 24 years.  Currently she is an Associate Professor in the William F. Harrah College of Hotel Administration at the University of Nevada, Las Vegas where she teaches in the Department of Tourism and Convention Administration.

An award-winning educator, Rhonda has been honored as Distinguished Educator of the Year at the University of South Carolina as well as receiving several other awards for teaching and service. She is an active member of Phi Eta Sigma, a National Freshman Honorary Association and has spoken at the National Conference on the Freshman Year Experience as well as at numerous other conferences around the country.

Her commitment to teaching and scholarship is evidenced by her prolific writing – not only has Rhonda written in the area of Student Success, where she co-authored Cornerstone: Building On Your Best, she has also coauthored, Capstone:  Succeeding Beyond College (Prentice Hall, 2001), Case Studies for the First Year: An Odyssey in Critical Thinking and Problem Solving (Prentice Hall, 2004); but she has also written in the area of hospitality management and written Club Managers Guide to Private Parties (Wiley, 2001) Meetings, Conventions, and Expositions:  An Introduction to the Industry (Wiley, 1998) as well as a chapter in Contemporary Club Management (Perdue, 2003) and  the trade book 365 Things I Learned in College (Allyn & Bacon, 1996) as well as numerous articles in scholarly journals.

Patricia G. Moody is Dean of the College of Hospitality, Retail and Sport Management at the University of South Carolina, where she has been a faculty member for over 30 years. An award-winning educator, Pat has been honored as Distinguished Educator of the Year at her college and as Collegiate Teacher of the Year by the National Business Education Association, and has been a top-five finalist for the Amoco Teaching Award at the University of South Carolina. She has been a recipient of the prestigious John Robert Gregg Award, the highest honor in her field of over 100,000 educators.

Pat frequently speaks to multiple sections of first-year students, incorporating personal development content from her trademark speech, “Fly Like an Eagle,” as well as numerous strategies for building self-esteem and for achieving success in college. She also works with first-year classes on subjects such as goal setting, priority management, and diversity.

A nationally known motivational speaker, Pat has spoken in almost every state, has been invited to speak in several foreign countries, and frequently keynotes national and regional conventions. She has presented “Fly Like an Eagle” to thousands of people, from Olympic athletes to corporate executives to high school students. Her most recent presentation is “99 Ways to Motivate Students.”

An avid sports fan, she follows Gamecock athletics and has chaired the University of South Carolina Athletics Advisory Committee. As the Dean of her college, Dr. Moody has led several international trips to build relationships and establish joint research projects.