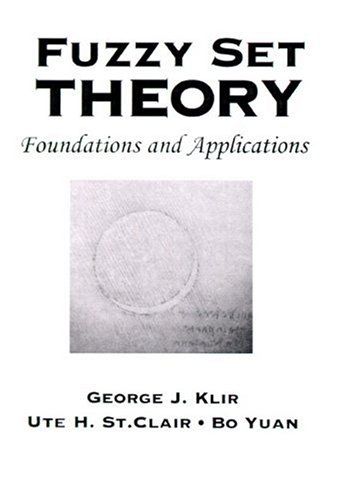 This book is designed to help anyone understand the basics of fuzzy sets, whether or not they have a mathematical background. The book first presents a basic grounding in information theory, classical logic and set theories. Next, it introduces the basics of fuzzy sets, distinguishing them from traditional crisp sets, and introducing the concept of membership function. The distinctions between classical and fuzzy relations are introduced, as are representations of fuzzy relations; fuzzy equivalence relations; fuzzy partial orderings, and related topics. The book introduces fuzzy arithmetic and fuzzy numbers. It also presents a detailed introduction to fuzzy logic, multivalued logics, fuzzy propositions, quantifiers, linguistic hedges and approximate reasoning. Several basic and advanced applications for fuzzy set theory are presented as well. Any non-technical reader interested in fuzzy sets and fuzzy logic. Also ideal for introductory level-students, whether they are planning a technical or non-technical course of study.

Since the early 1990s, literature on fuzzy set theory and its various applications has been rapidly growing. Hundreds of books on this subject are now available on the market. Most of them are either edited collections of papers on various themes or monographs on special topics. Textbooks on fuzzy set theory are still rather rare, in spite of the growing need for such textbooks at all levels of higher education.

This book, Fuzzy Set Theory: Foundations and Applications, is intended to fill a particular gap in the literature. Its aim is to serve as a textbook for a general course in undergraduate liberal arts and sciences programs. This aim is reflected in the content of the book and the style in which it is written.

We hope the text will help to develop undergraduate courses in which students will be exposed at an early stage of their studies to basic ideas of the increasingly important fuzzy set theory. The course may already be offered at the freshman or sophomore levels. It may be viewed as a meaningful replacement and enrichment of a typical course on the basics of classical set theory and classical logic, which is often required in undergraduate liberal arts and sciences programs.

Since the text is intended for a general course and not a course oriented to majors in any particular discipline, it covers only the most fundamental concepts of fuzzy set theory. Various special topics, particularly relevant to some disciplines, are not covered. Examples are chosen, by and large, from daily life. The broad applicability of fuzzy set theory in many areas of human affairs is surveyed but not covered in detail. Only a few examples of applications are covered, chosen again from daily life.

For further study of fuzzy set theory and fuzzy logic, the graduate text Fuzzy Sets and Fuzzy Logic: Theory and Applications by G.J. Klir and B. Yuan (Prentice Hall, 1995) offers the most natural continuation of this undergraduate text. The main advantage is that both books use the same terminology and notation.

We expect that any shortcomings of this text, caused either by its content or its style, will emerge from its use in various classroom environments. We intend to identify them, hopefully with the help of instructors and students using the text, and make appropriate revisions at some time in the future. For this purpose, we welcome any suggestions from instructors, students, or other readers of the book.

Lastly, we would like to express our gratitude to Ms. Deborah Stungis for reading the entire manuscript of this book and for providing us with many useful comments, as well as to Ms. Yin Pan for composing parts of the book and contributing to various technical issues.

From the beginning of modern science until the end of the nineteenth century, uncertainty was generally viewed as undesirable in science, but with the emergence of statistical mechanics in the twentieth century, the unmanageable complexity of mechanical processes on the molecular level led to the adoption of statistical principles and principles of probability theory. However, in spite of its success, probability theory alone is not capable of capturing uncertainty in all of its manifestations, particularly when it arises from the vagueness of natural language. Thus, a new theory arose which treats this aspect of uncertainty: fuzzy set theory.

Fuzzy Set Theory: Foundations and Applications serves as a simple introduction to basic elements of fuzzy set theory. The emphasis is on a conceptual rather than a theoretical presentation of the material. Fuzzy Set Theory also contains an overview of the corresponding elements of classical set theory-including basic ideas of classical relations-as well as an overview of classical logic. Because the inclusion of background material in these classical foundations provides a self-contained course of study, students from many different academic backgrounds will have access to this important new theory.

“This user-friendly text is a valuable resource to introduce professionals from many disciplines to the broad applicability of fuzzy set theory and fuzzy logic to many areas of human affairs. Electrical, mechanical, and software engineers, chemists, and managers will find this a useful tool for learning about basic principles and ideas of the increasingly important fuzzy set theory which later could progress to its application in their specific fields. This book would be appropriate as a textbook for a general course in undergraduate liberal arts and sciences programs as a meaningful enrichment of a typical course on the basics of classical set theory and classical logic, and as a reference source for introductory short courses for working professionals.” Prof. Marian Stachowicz, Jack Rowe Chair, Dept. of Computer Eng., Univ. of Minnesota