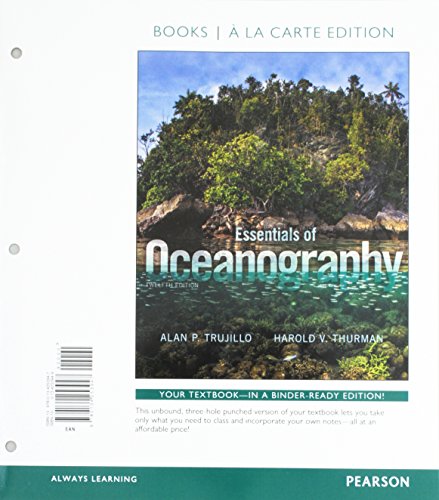 NOTE: This edition features the same content as the traditional text in a convenient, three-hole-punched, loose-leaf version. Books a la Carte also offer a great value—this format costs significantly less than a new textbook. Before purchasing, check with your instructor or review your course syllabus to ensure that you select the correct ISBN. Several versions of Pearson's MyLab & Mastering products exist for each title, including customized versions for individual schools, and registrations are not transferable. In addition, you may need a Course ID, provided by your instructor, to register for and use Pearson's MyLab & Mastering products.

For courses in Oceanography.

Essentials of Oceanography guides students through the complexities of what lies beneath the ocean. With an interdisciplinary approach and accessible writing style, the text is engaging for students of all majors. The Twelfth Edition discusses the ocean’s biological, chemical, geological, and physical components for an in-depth understanding of this vast and elaborate topic. Complex concepts are made engaging with extensively revised art, new animations and the interdisciplinary connections that keep students interested and excited about the material.

MasteringOceanography from Pearson is the leading online homework, tutorial, and assessment system, designed to improve results by engaging students before, during, and after class with powerful content. Instructors ensure students arrive ready to learn by assigning educationally effective content before class, and encourage critical thinking and retention with in-class resources such as Learning Catalytics. Students can further master concepts after class through traditional and adaptive homework assignments that provide hints and answer-specific feedback. The Mastering gradebook records scores for all automatically graded assignments in one place, while diagnostic tools give instructors access to rich data to assess student understanding and misconceptions.

Frank Schmalleger, Ph.D., is professor emeritus at the University of North Carolina at Pembroke, where he is also recognized as Distinguished Professor. Dr. Schmalleger holds degrees from the University of Notre Dame and The Ohio State University, having earned both a master's (1970) and a doctorate in sociology (1974) from The Ohio State University with a special emphasis in criminology. From 1976 to 1994, he taught criminal justice courses at the University of North Carolina at Pembroke. For the last 16 of those years, he chaired the university's Department of Sociology, Social Work, and Criminal Justice. As an adjunct professor with Webster University in St. Louis, Missouri, Schmalleger helped develop the university's graduate program in security administration and loss prevention. He taught courses in that curriculum for more than a decade. Schmalleger also taught in the New School for Social Research's online graduate program, helping build the world's first electronic classrooms in support of distance learning through computer telecommunications. An avid Web user and site builder, Schmalleger is also the creator of award-winning websites.