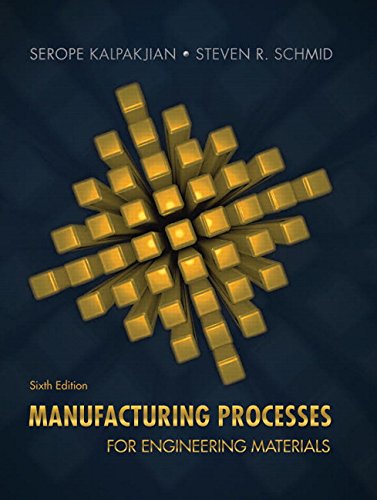 Manufacturing Processes for Engineering Materials addresses advances in all aspects of manufacturing, clearly presenting  comprehensive, up-to-date, and balanced coverage of the fundamentals of materials and processes. With the Sixth Edition, you'll learn to properly assess the capabilities, limitations, and potential of manufacturing processes and their competitive aspects. The authors present information that motivates and challenges for understanding and developing an appreciation of the vital importance of manufacturing in the modern global economy. The numerous examples and case studies throughout the book help to develop a perspective on the real-world applications of the topics described in the book. As in previous editions, this text maintains the same number of chapters while continuing to emphasize the interdisciplinary nature of all manufacturing activities, including the complex interactions among materials, design, and manufacturing processes.

Serope Kalpakjian is professor emeritus of mechanical and materials engineering at the Illinois Institute of Technology. He is the author of Mechanical Processing of Materials and co-author of Lubricants and Lubrication in Metalworking Operations (with E.S. Nachtman); both of the first editions of his textbooks Manufacturing Processes

for Engineering Materials and Manufacturing Engineering and Technology have received the M. Eugene Merchant Manufacturing Textbook Award. He has conducted research in various areas of manufacturing, is the author of numerous technical papers and articles in handbooks and encyclopedias, and has edited several conference proceedings. He also has been editor and co-editor of various technical journals and has served on the editorial board of Encyclopedia Americana.

Among other awards, Professor Kalpakjian has received the Forging Industry Educational and Research Foundation Best Paper Award, the Excellence in Teaching Award from lIT, the ASME Centennial Medallion, the International Education

Award from SME, A Person of the Millennium Award from lIT; the Albert Easton White Outstanding Teacher Award from ASM International, and the 2016 SME Gold Medal. The Outstanding Young Manufacturing Engineer Award, by SME, in

2001, was named after him. Professor Kalpakjian is a Life Fellow ASME, Fellow SME, Fellow and Life Member ASM International, Fellow Emeritus the International Academy for Production Engineering (CIRP), and is a founding member

and past president of NAMRI. He is a graduate of Robert College (High Honor, Istanbul), Harvard University, and the Massachusetts Institute Technology.

Steven R. Schmid is professor of Aerospace and Mechanical Engineering at the University of Notre Dame, where he teaches and conducts research in the general areas of manufacturing, machine design, and tribology. He received his

B.S. degree from Illinois Institute of Technology (with Honors) and Master’s and Ph.D. degrees from Northwestern University, all in mechanical engineering. He has received numerous awards, including the John T. Parsons Award from SME, the Newkirk Award from ASME, the Kaneb Center Teaching Award (three times), and the Ruth and Joel Spira Award for Excellence in Teaching.

Professor Schmid served as the President of the North American Manufacturing Research Institution (NAMRI, 2015-2016) and was appointed the first Academic Fellow at the Advanced Manufacturing National Program Office, U.S. Department of Commerce, where he helped design the National Network for Manufacturing Innovation. Dr. Schmid is the author of over 140 technical papers, and has co-authored the texts Fundamentals of Machine Elements, Fundamentals of Fluid Film Lubrication, and Manufacturing Engineering and Technology.