Items related to How to Watch TV News

How to Watch TV News 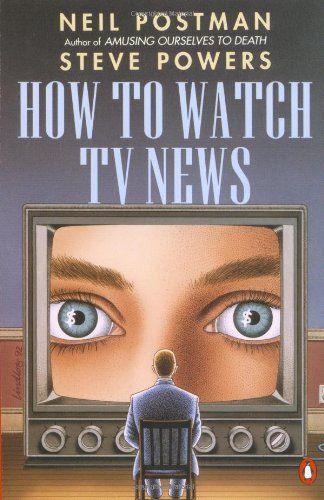 A guide to watching television news discusses the calculated programming, the viewer manipulation, and the big business behind today's news networks and shows readers how to interpret what they are hearing and seeing. Original.

This little manual undertakes to equip the user to watch broadcast news intelligently, if at all, and with realistic expectations. The authors aim to make activity out of what is too often passivity. Their approach is carefully reasoned, rather than emotional. This book is no more intended to be read aloud for dramatic effect than an automobile repair manual. On the other hand, being a model of clarity and not dependent on charts or graphics, it works perfectly well in audio. Jeff Riggenbach's reading is ideal: very clear, comfortably paced and objective in tone. This reviewer urges this book on every adult in America. J.N. (c)AudioFile, Portland, Maine

Academic Postman ( Amusing Ourselves to Death ) and television newsman Powers (of Fox Five in New York) offer a brief, helpful analysis of America's most popular news source. In a sober but accessible style, the authors address theoretical issues, such as the difficulty of portraying nonvisual abstractions (for example, a new scientific theory) on televison, and describe the selling of the news through techniques such as the "tease" and the formation of an on-air "pseudo-family." They reveal how stories originate--often from newspapers and press releases--and show how difficult it is for harried reporters to provide substantive news. The most provocative chapter analyzes the inherent biases and limitations in both language and pictures. The authors conclude with several none-too-radical pieces of advice, including the suggestion that parents seek ways to have schools train children in watching TV news. Regrettably, the authors don't discuss the role of TV criticism or what television news does well. Further, the book would have been much richer if Powers had included anecdotes from his career and reflected from his own experience on in-house decision-making.
Copyright 1992 Reed Business Information, Inc.

2. How to Watch TV News Postman, Neil and Powers, Steve

3. How to Watch TV News Postman, Neil and Powers, Steve