Items related to The Eighth Day of Creation : Makers of the Revolution...

Judson, Horace Freeland The Eighth Day of Creation : Makers of the Revolution in Biology

The Eighth Day of Creation : Makers of the Revolution in Biology 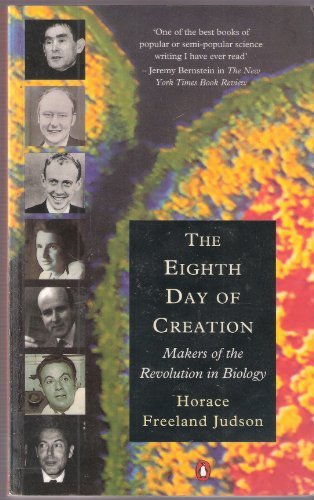 In this classic book, the distinguished science writer Horace Freeland Judson tells the story of the birth and early development of molecular biology in the US, the UK, and France. The fascinating story of the golden period from the revelation of the double helix of DNA to the cracking of the genetic code and first glimpses of gene regulation is told largely in the words of the main players, all of whom Judson interviewed extensively. The result is a book widely regarded as the best history of recent biological science yet published.

This commemorative edition, honoring the memory of the author who died in 2011, contains essays by his daughter Olivia Judson, Matthew Meselson, and Mark Ptashne and an obituary by Jason Pontin. It contains all the content added to previous editions, including essays on some of the principal historical figures involved, such as Rosalind Franklin, and a sketch of the further development of molecular biology in the era of recombinant DNA.

In the foreword to this expanded edition of his 1979 masterpiece, Horace Freeland Judson says, "I feared I might seem the official historian of the movement"--molecular biology, that is. If by official he means "authoritative; definitive; the standard against which all others are measured" then his fears are warranted. Detailed without being overly technical, humane without being fulsome, The Eighth Day of Creation tells of molecular biology's search for the secret of life. "The drama has everything--exploration of the unknown; low comedy and urgent seriousness; savage competition, vaulting intelligence, abrupt changes of fortune, sudden understandings; eccentric and brilliant people, men of honor and of less than honor; a heroine, perhaps wronged; and a treasure to be achieved that was unique and transcendent." And in Judson this drama found its Shakespeare.

"A historian has mused that the memory of man is too frail a thread on which to hang history; Judson's achievement, in drawing out the memories of so many participants in the epic of molecular biology and weaving them into a single robust skein, is magisterial. His work fittingly commemorates a golden age which already seems as remote as that of Darwin and Huxley."
Nature

"This reissue of a pioneering history of molecular biology, for some years out of print, is essentially a reprint of the first edition of 1979. Horace Judson has corrected a few minor errors (remarkably few for such a fact-filled book), given a sharper emphasis to Frederick Sangers' work on protein sequencing to reflect his (Judson's) conviction of its central importance, and added some personal details to a biographical sketch of Rosalind Franklin. Finally, an epilogue touches very briefly on developments in the 1970s that were the foundations for the subsequent vast expansion of molecular biologyEL. This epilogue obviously is not meant to bring Judson's original story up to the presentthat would take another large bookbut only to point readers to topics that Judson leaves for other historians to explore.

The Eighth Day of Creation has aged well, like a good vintage, and its very good to have it available again."
ISIS
"The revelations of modern biology make a remarkable human and scientific story, and it has never been told better than in Horace Freeland Judson's The Eighth Day of CreationEL. What is especially fortunate is that he is a graceful writer with a keen sense of the human as well as the scientific dramaEL. I finished the book with a great sense of elation and a deepened sense of admiration for what the human family, at its best, can accomplish." (Review of the First Edition)
JEREMY BERNSTEIN, New York Times Book Review
"In his massive, marvelous history of molecular biologyEL Judson introduces us to many fiendishly clever experiments, some fiercely competitive rivalries, and some of the greatest scientific minds ever to ponder the mysteries of biologyEL. He has talked with nearly everyone involved, and The Eighth Day of Creation is a unique oral history of a scientific revolution; to my knowledge there has been nothing else like it." (Review of the First Edition)
LEON GUSSOW, Chicago Tribune

1. Eighth Day of Creation : Makers of the Revolution in Biology

2. The Eighth Day of Creation: Makers of the Revolution in Biology (Penguin Press Science S.)

Shipping: US$ 19.55
From United Kingdom to U.S.A.
Destination, rates & speeds