Items related to The Stone Diaries 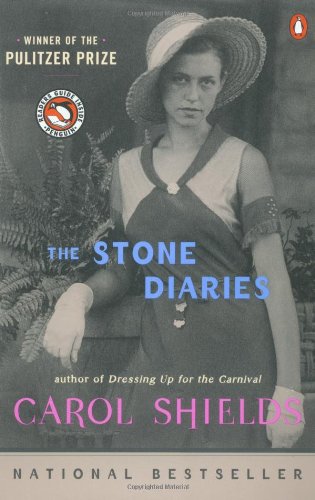 From her birth in rural Manitoba, to her journey with her father to southern Indiana, to her years as a wife, mother, and widow, to her old age, Daisy Stone Goodwill struggles to find a place for herself in her own life

This fictionalized autobiography of Daisy Goodwill Flett, captured in Daisy's vivacious yet reflective voice, has been winning over readers since its publication in 1995, when it won the Pulitzer Prize. After a youth marked by sudden death and loss, Daisy escapes into conventionality as a middle-class wife and mother. Years later she becomes a successful garden columnist and experiences the kind of awakening that thousands of her contemporaries in mid-century yearned for but missed in alcoholism, marital infidelity and bridge clubs. The events of Daisy's life, however, are less compelling than her rich, vividly described inner life--from her memories of her adoptive mother to her awareness of impending death. Shields' sensuous prose and her deft characterizations make this, her sixth novel, her most successful yet.

Who is the real Daisy Goodwill? In this miniaturist masterpiece, Carol Shields pieces together one woman’s story, from its dramatic beginning in a Manitoba kitchen at the turn of the last century to its closing chapter in a Florida hospital in the early nineties. Drifting through the stages of childhood, romance, motherhood, and old age — and frequently crowded out of her own history by more flamboyant forebears, friends, and relations — Daisy emerges as a twentieth-century Everywoman and her life as a diary of this “mean old sentimental century.”

Book Description Penguin Books, 1995. Condition: New. From her calamitous 1905 birth in Manitoba to her journey with her father to Indiana, throughout her years as a wife, mother, and widow, Daisy Stone Goodwill struggles to understand her place in her own life. Now, in old age, Daisy attempts to tell her life story within a novel that is itself about the limitations of autobiography. Seller Inventory # 9780140233131