Items related to The Burnt Stick 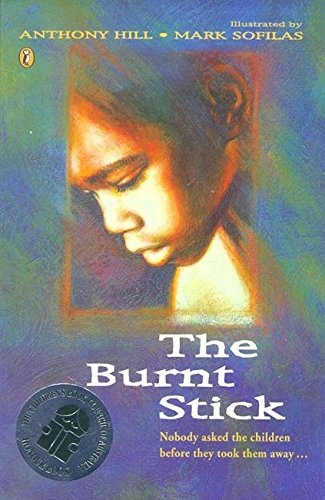 When John Jagamarra was five, he was taken away from his mother and home in an Australian aboriginal camp. John was half-white, and the law said he had to be educated in a mission school to learn the ways of white people. But John never forgot his real home - or his mother, who dared to trick the men from the welfare department by darkening him with a burnt stick to hide his light skin. A poignant tale of painful separation, abiding love, and enduring memory.

Grade 3-5?Born to an Aboriginal mother and a white father, John Jagamarra lives happily at Dryborough Station, Australia, cared for by his extended family and steeped in the traditions of his tribal culture. One day, however, the "Big Man from Welfare" comes to take him away, for, since he is of mixed parentage, the law requires that he be sent to a mission to learn the white man's ways. Liyan, desperate to keep her son, takes a burnt stick and covers his body with charcoal and soot. Her trick fools the government officials twice, but finally the five-year-old is carried off to the Pearl Bay Mission for Aboriginal Children. Years later, he returns to the Station with his own son. Though his family and all traces of the cattle ranch have disappeared, John rubs charcoal from a burnt stick into his son's skin, reminding the boy that their native background will always be part of them. A prefatory note on the mixed parentage law, which was practiced into the 1960s, sets the historical context of the tale. Stylistically, it is reminiscent of Mildred Taylor's The Friendship and The Gold Cadillac (both Dial, 1987), for dialogue and clear description are used effectively to convey the horrors of the situation. The loving bond between John and his mother is evident. The white characters, with one exception, appear cold and calculating. Their complete disregard for the natives' feelings at losing their children is painfully clear as the welfare man claims, "They are not like us. They soon forget." Sofilas's half-and full-page illustrations give a good sense of the sparse landscape and enhance the rather somber mood. His choice of media?soft black pencil and charcoal?reinforces the concept of the burnt stick. His closeup of John's innocent face and his drawing of Liyan's devastated form as her son is taken away are particularly well executed. This simple story will serve as a poignant reminder of the insensitivity with which white colonists have often dealt with native cultures.?Nancy Menaldi-Scanlan, LaSalle Academy, Providence, RI
Copyright 1995 Reed Business Information, Inc.

Gr. 4^-7. A wrenching Australian story, based on fact, tells of John Jagamarra, a boy of mixed parentage, who is torn from his loving Aborigine mother at the age of five and raised in a white missionary community. The law said it was for his own good to be taught white ways, that the mother and the child would soon get over their loss. They don't get over it, as the story and haunting charcoal pencil drawings show. The whites aren't demonized; they're just doing what seems right to them. Tension builds inexorably in the Aborigine desert community as the welfare officials come to take the child. Three times his mother darkens John's skin with soot from the fire, but finally her trick is revealed, and he is dragged away. Some middle-graders may giggle at the occasional nude drawing of "exotic" natives. The emotional impact is in the contrast between the natural physicality of the Aborigine scenes and the heavy truck with its padlocked wire cage that takes the boy away. There are parallels with the history of Indian children in this country forced to attend white boarding schools far from home. Hazel Rochman

Book Description 1996. Paperback. Condition: New. 1st. Paperback. John Jagamarra grew up at the Pearl Bay Mission for Aboriginal children in the far north-west. It was beautiful there, but it wasn't home. This is a tale for everyone about the pain of sep.Shipping may be from multiple locations in the US or from the UK, depending on stock availability. 64 pages. 0.130. Seller Inventory # 9780140369298

Book Description 1996. Paperback. Condition: New. 1st. Paperback. John Jagamarra grew up at the Pearl Bay Mission for Aboriginal children in the far north-west. It was beautiful there, but it wasn't home. This is a tale for everyone about th.Shipping may be from our Sydney, NSW warehouse or from our UK or US warehouse, depending on stock availability. 64 pages. 0.130. Seller Inventory # 9780140369298