Items related to The Aerialist 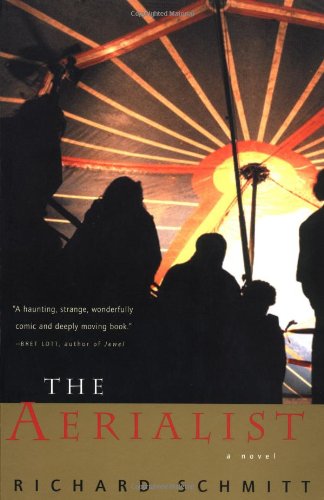 From an authentic American voice, a stunning, gritty tale of a young man's retreat into the darkly glamorous world of the circus.

Venice, Florida: On the edge of town sits the winter headquarters of a
traveling circus. One day Gary, a drifter, signs up for a job as a bullhand
with the circus.

Everyone has heard of the ringmaster, the trapeze artist, and the clown, but Gary soon learns that the circus includes others as well: the 24-hour man, the first to arrive in a town to poster the way to the circus grounds; the bullhands who remove elephant excrement from under the animals' bodies; the butchers who distract the audience from the circus spectacle selling them cotton candy or lemonade; the animal people who care for the animals and keep to themselves. Gary instantly falls in love with this new life, riding the circus train from one town to the next in the odd hours of the night.

This acclaimed debut tells of a hapless, magical existence-a life for which Richard Schmitt's characters have abandoned everything and nothing at all. In it, the circus unfolds as a wealth of human energy and ambition, and Schmitt emerges as a talent with a magical voice and a high-flying future.

Richard Schmitt's first novel, The Aerialist, chronicles the transformation of a disenfranchised '70s youth into a human miracle, a model of discipline, a machine capable of astonishing feats of balance and strength on a circus tightrope, a high-wire walker, a death-defying artist. In the beginning, a couple of pothead New England émigrés trying to operate an auto-detailing business in Venice, Florida, get mixed up with a blood-soaked Buick Riviera. While joy riding, Gary and Dave spin out and get stuck in the sandy shoulder of a road near the winter quarters of a circus troupe. It's an elephant they need to pull them out, but their trip for help is more like a descent into the rabbit hole, into a fantastic and seductive alternative reality--and there's no coming back.

These are not the Wallendas, kids from a circus family brought up in the trade, they're outsiders looking for somewhere to belong. Gary floats into a position as a bull handler, managing elephants with a barbed stick. Then he becomes a butcher, a hawker of cheap treats and souvenirs, before moving into wardrobe. He's riding the train, part of the circus, one of the workingmen, but it's the performers who mesmerize him--the ultra-fit, super-focused stars who use every spare moment for practice. Dave, his hapless sidekick, is along for the ride more than anything else; fighting cancer, he lives like there is no tomorrow.

First-person narration by Gary alternate with vignettes told in other voices, a technique that produces a satisfying kaleidoscopic weave of perspective. The Aerialist is rich in behind-the-scenes circus lore and peopled with a large cast of unusual folk, but its greatest satisfaction lies in its informed literary authority. The subject is sensational, the writing accomplished. In Zurich, a journalist watches Gary practice:

The wire over his head is low enough to jump to. He buckles leather handgrips around the wrists like you've seen gymnasts do on TV. Thin strips of rawhide to protect the palms. Two inches by six inches with holes for the middle and ring fingers and straps to pull the leather tight across the palm. Under the leather straps terrycloth wristbands keep the sweat from his hands. He wears white kneesocks and shorts over a pair of black tights. On his feet are white leather pull-ons similar to ballet shoes; he has them stuck inside an oversized pair of clogs. Clinging to the top half of his body, more decoration than shirt, a white tanktop. He stands under the wire and flexes his shoulders, rotates his head, arches his back, bends over and places his palms flat on the ground in front of him. There is the sound of breathing and the cracking and popping of joints over the sound of the water lapping at the black roots of willows.

More about growing up and individuality than about extraordinary life choices, this is an intelligent and cerebral evocation of a very unusual journey and a most impressive debut. --Victoria Jenkins From the Publisher:

The circus represents a metaphor for life, for the struggle to rise higher within it, notes Tracy Carns, publishing director of Overlook Press. The titular hero of THE AERIALIST, by Richard Schmitt, does just that. Breaking in with the circus in Venice, Florida, Gary gets his first job mucking out elephant cages and climbs from there to a successful high-wire act. "There's really a strong sense of place," says Carns, "with the circus in Florida and then when it starts traveling across Texas and up into Oklahoma." THE AERIALIST is the latest in Overlook's Sewanee Writers' Series.