Items related to The Oxford Book of Work 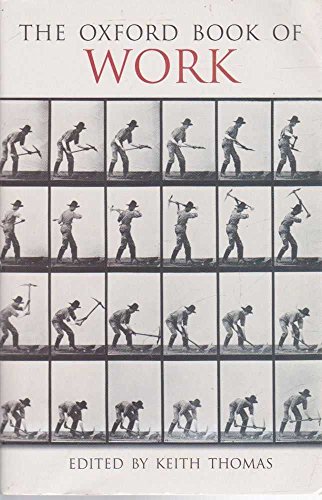 Primal curse or sacred duty? Painful drudgery or the only sure route to human happiness? Work has always evoked conflicting reactions. Yet whether we view it as a tedious necessity or embrace it as a compulsive addiction, it remains an inescapable and endlessly fascinating part of the human condition.
To illuminate the changing experience of work, this deeply enjoyable anthology draws upon more than 500 writers from classical antiquity to modern times: poets, dramatists and novelists; theologians, economists and philosophers; social investigators and journalists; diarists, letter-writers and autobiographies. Charles Aickens, Adam Smith, Anthony Trollope, Mark Twain, Washington Irving, Karl Marx, Tolstoy, George Eliot, Henry Ford, John Steinbeck, Primo Levi, Upton Sinclair, Simone de Beauvoir, Robert Frost, Tom Wolfe, Harriot Martineau, Louisa Alcott, and Dorthy Parker are among the diverse and distinguished authors included in this volume.
While Keith Thomas explores many different forms of work--from ploughing a field to sailing the sea, from mining for coal to writing a poem, and from keeping shop to practicing medicine--he does not forget housework, schoolwork, and other forms of unpaid labor. All human life is here: young people starting work, the multitudes seeking employment, the old coping with retirement, and utopians seeking to eliminate work altogether. The delights of occupation and the harshness of compulsory labor are contrasted with the pleasures of rest and idleness.
Keith Thomas's magisterial compilation and scintillating introductory essay show that work does not just provide us with the means of subsistence; it also makes possible all the pleasures and acievements of civilization.

About the Author:
Sir Keith Thomas is President of Corpus Christi College, Oxford, and a former President of the British Academy. He is the author of Religion and the Decline of Magic (1971), Man and the Natural World (1983), and many other writings on the social and cultural history of early modern England. He is General Editor of Past Masters and Oxford Studies in Social History.
Review:
"A phantasmagoric mixture of wit and witness."--Edward Rothstein, The New York Times
"An instant classic.... These hundreds of thoughtful passages...represent the total spectrum of the complicated feelings we have about our jobs.... There's genuine wisdom and thoughtfulness on all of these pages about nothing less than our roles and responsibilities as human beings living in societies."--Forbes
"An amazingly varied collection of poems, snippets of novels, newspaper articles, diaries, socialist denunciations and capitalist celebrations about the experience of working, from the farmers of ancient Greek times to modern office workers.... Thomas makes labor come to life by charting a stark, great historical conflict in the value given to working, a conflict between those who believe work is degrading and those who believe we fulfill ourselves through our jobs."--Richard Sennett, The Los Angeles Times Book Review
"Some of the most vivid and insightful writings about work"--Baltimore Sun
"An incredible chorus of voices...all single-mindedly devoted to telling what work has really been about over the centuries."--The Chicago Tribune