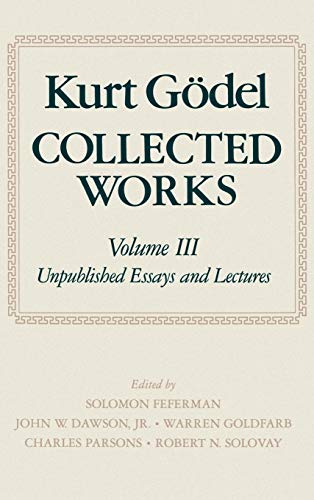 Kurt Gödel (1906-1978) was the most outstanding logician of the twentieth century, famous for his hallmark works on the completeness of logic, the incompleteness of number theory and stronger systems, and the consistency of the axiom of choice and the continuum hypothesis. He is also noted for his work on constructivity, the decision problem, the foundations of computation theory, unusual cosmological models, and for the strong individuality of his writings on the philosophy of mathematics. The Collected Works is a landmark resource that draws together a lifetime of creative accomplishment. The first two volumes were devoted to Gödel's publications in full (both in the original and translation). This third volume features a wide selection of unpublished articles and lecture texts found in Gödel's Nachlass, documents that enlarge considerably our appreciation of his scientific and philosophical thought and add a great deal to our understanding of his motivations. Continuing the format of the earlier volumes, the present volume includes introductory notes that provide extensive explanatory and historical commentary on each of the papers, English translations of material originally written in German (some transcribed from Gabelsberger shorthand), and a complete bibliography. A succeeding volume is to contain a comprehensive selection of Gödel's scientific correspondence and a complete inventory of his Nachlass. The books are designed to be accessible and useful to as wide an audience as possible without sacrificing scientific or historical accuracy. The only complete edition available in English, it will be an essential part of the working library of professionals and students in logic, mathematics, philosophy, history of science, and computer science.

S. Feferman is at Stanford University. John W. Dawson is at Pennsylvania State University. Warren Goldfarb and Charles Parsons are both at Harvard University. R. Solovay is Professor Emeritus at University of California, Berkeley.

"The book....will certainly enlarge our appreciation of Gödel's scientific and philosophical thought as well as our understanding of his motivations. With great impatience we await now the succeeding volume...." --Mathematical Reviews

"As a whole this volume is as indispensable as the two former ones for any serious student of Godel's ideas and achievements, but in this case it is also indispensable for philosophers interested in logic and mathematics. The fourth (and last?) volume of this formidable series will be devoted to Godel's correspondance, so we should look forward to having it to study."--Modern Logic
"On the whole....the editors are to be wholeheartedly congratulated on bringing to the public work which deserves careful study and which ought to do something to revitalise the philosophy of mathematics by presenting a point of view that, unusualy, combines intellectual rogour with a willingness to make bold and sweeping metaphysical claims." --Times Higher Education Supplement
"This is the third volume of a comprehensive and critical edition of the works of Kurt Gödel. . .All these essays and lectures are most carefully written and remarkably rich. They give considerable insight into Gödel's own achievements in logic, set theory and physics and also into his philosophical views. . . .This volume was a desideratum for a long time. We also hope very strongly that volume 3 is not the last volume." --Vienna Circle Institute Yearbook 1997 contains unpublished material