Items related to Unfoldings: Essays in Schenkerian Theory and Analysis 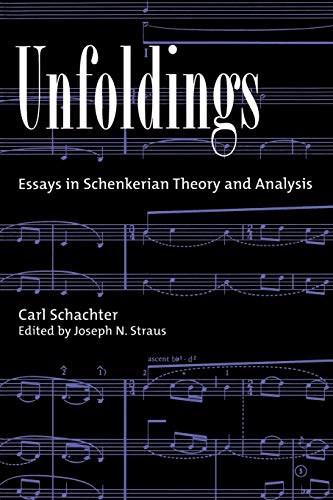 Carl Schachter is, by common consent, one of the world's preeminent music theorists. He is surely the foremost practitioner of the Schenkerian approach to the music of the eighteenth and nineteenth centuries, which focuses on the linear organization of music and frequently dominates discussions of the standard repertoire in university courses and professional journals. Schachter's articles have thus appeared in a variety of periodicals, including some that are obscure or hard to obtain. This volume gathers some of his finest essays, including those on rhythm in tonal music, Schenkerian theory, and text setting, as well as a pair of analytical monographs, on Bach's Fugue in B-flat major from Volume 1 of the Well-Tempered Clavier and Chopin's Fantasy, Op. 49.

One of the preeminent figures in the world of music theory, Carl Schachter is Distinguished University Professor Emeritus in the Department of Music at Queens College and the Graduate Center of the City University of New York. He is also on the faculty at the Mannes College of Music.

Joseph N. Straus is Professor of Music at Queens College and the Graduate Center of the City University of New York and former President of the Society for Music Theory. His books include Remaking the Past: Musical Modernism and the Influence of the Tonal Tradition (1990) and The Music of Ruth Crawford Seeger (1995).

"The idea of feting Carl Schachter by publishing a collection of his essays in music theory and analysis is most laudable. Schachter is one of the heroes of musical analysis, and his collected writings explain Schenkerian analysis better than any of the existing textbooks in English on the subject. Joseph N. Straus, a scholar of high standing, is well placed to put this book together."--William Drabkin, University of Southampton

"Many of the foremost among the new generation of music scholars and theorists have been Schachter's students. Schachter's role in the dissemination and broadening of Schenker's teaching can hardly be overestimated....By and large, Schachter's articles, along with the writings of Oswald Jonas and Ernst Oster, represent the most significant scholarly, original contributions to Schenkerian music theory since Schenker's work itself. Stimulating and imaginative, they emanate from a unique and authoritative command of the topic. I would consider Schachter's work and articles as important as any music-theoretical work in our time, and essential reading for anyone seriously interested in music theory."--Edward Laufer, University of Toronto
"Carl Schachter is one of the preeminent music theorists, or music analysts, in the English-speaking world, and he is the world's leading practitioner of Heinrich Schenker's analytical method. He has not only applied Schenker's theories in a particularly beautiful and elegant way; he has expressed those theories--especially in the domain of musical rhythm--in an exemplary manner, combining the most sensitive musical imagination with scrupulous reasoning and scholarly caution. These facts alone amply justify the publication of Unfoldings. But, in addition, Schachter is unmatched as a communicator of complex musical ideas. His writing, like his lecturing, is so graceful, so cultured, and yet so utterly lacking in pretension, that it is a joy to read....This volume is a permanent treasure."--William Rothstein, Queens College and the Graduate Center, City University of New York