Items related to Development as Freedom 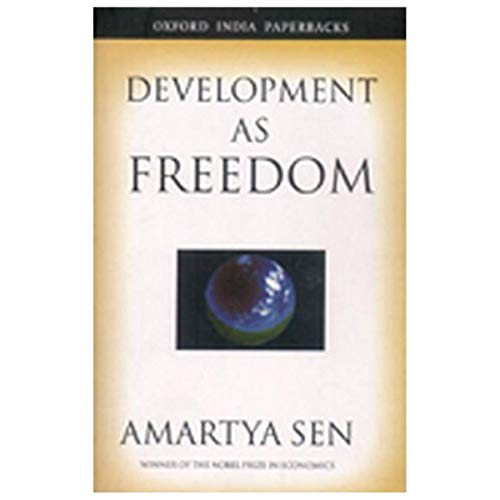 By the winner of the 1988 Nobel Prize in Economics, an essential and paradigm-altering framework for understanding economic development - for both rich and poor - in the twenty-first century.

Freedom, Sen argues, is both the end and most efficient means of sustaining economic life and the key to securing the general welfare of the world's entire population. Releasing the idea of individual freedom from association with any particular historical, intellectual, political, or religious
tradition, Sen clearly demonstrates its current applicability and possibilities. In the new global economy, where, despite unprecedented increases in overall opulence, the contemporary world denies elementary freedoms to vast numbers - perhaps even the majority of people - he concludes, it is still
possible to practically and optimistically restain a sense of social accountability. Development as Freedom is essential reading.

A conversation with Amartya Sen, author of Development as Freedom

Q: Please explain the premise of your book.
A: The premise of the book is that human freedom is not only the primary end of development, it is also the principle means. Development consists in enhancing the quality of human life and increasing the substantive freedoms we enjoy, and therefore freedom is constructive in development (that is, the process of development is the process of making our freedoms larger). But, in addition, freedom of one kind tends to facilitate freedoms of other kinds. For example, economic opportunities, political liberties and social facilities strengthen each other, in addition to each being directly important in increasing the individuals' freedoms.

Q: How does your theory of development differ from conventional thinking?
A: It revives a line of thinking that was extremely important in the reasoning of pioneers of economic and social analysis, in particular Adam Smith, Condorcet, John Stuart Mill, and others. In fact, the motivation of economic studies from the earliest times (Aristotle in Greece, and Kautilya in India, both in the third century BC) was deeply concerned with enhancing the quality of human life and increasing the options we have. This is true even of the medieval beginnings of modern economics, for example in the writings of William Petty, one of the founders of the Royal Society of London. While they were all concerned with material prosperity, they saw it as a means to other -- bigger -- ends. The idea that development consists just of an increase in GNP or GDP or real national income per head, or some other commodity indicator like that, is basically a vulgarization of the vision that motivated the origin of the development of economics. What the book tries to do is to reclaim that original version and to place the more immediate variables in a bigger context, in which they could be judged in terms of what they manage to do for human life and liberty.

Q: How can the theory presented in this book be practically applied to developing nations?
A: This is primarily a question of having an adequate reach and balance in policy-making in developing countries. For example, to try to judge democracy or political liberty entirely (or primarily) in terms of their effects on economic growth would be a mistake, since liberty and political freedom are themselves valuable and do not have to be justified in terms of their indirect effects. In this sense the approach of the book goes against a great deal of policy thinking. But the book also discusses why the indirect effects are also important, since political freedom can reinforce economic opportunities, and vice versa. For example, political freedom gives voice to the vulnerable sections of the population and provides them with the power to demand and receive protective support in times of emergency crisis. The fact that no famine has ever taken place in a country that is democratic and has multi-party politics and a free media, is merely illustrative of this connection. To take another illustration, the enhancement of social opportunities through public arrangements for school education, is not only directly enhancing the capabilities of the people (which is valuable in itself), but it also increases their ability to participate in economic activities, especially in a globalizing economic world.

Q: Can the concepts in your book be applied to U.S. inner cities? If so, how?
A: Indeed quite a lot of the book does deal with deprivation in rich countries. When we shift our focus from income per head, which makes the relatively poor in America look relatively rich in the world context, and concentrate instead on such matters as survival chances to the later ages, we see that the relatively deprived in America are also relatively deprived in the world. The Chinese, the Indians in the better provided states, the Sri Lankans, and others have a much larger chance of living to later ages than do, say, African-Americans as a general group. African-Americans in inner cities often do substantially worse in terms of survival than the poorest people in some of the countries with reasonable arrangements for school education and health care. In fact, in many U.S. cities (such as Washington, DC) life expectancy at birth is in general lower than that in India and Pakistan.

It is necessary to look directly at those things which motivate our search for economic prosperity. Economics is not only concerned with generating income, but also making good use of that income to enhance our living and our freedoms. The general lesson has a major bearing on policy issues (such as medical insurance, health care, school education, etc.) related to the U.S. inner cities.

Q: You have made some shocking calculations regarding global inequality, including the startling figure of 100 million "missing" women. Would you please explain this number and what you mean by "missing?"
A: What the estimates of "missing women" do is to calculate the number of women who would have been there had women had similar relative chances of survival.

Given similar care, women tend to live longer than men and indeed have lower age-specific mortality than men almost throughout their lives (this is ultimately a biological difference, and even female fetuses have a lower miscarriage rate than do male fetuses). So even though more boys are born than girls, by the time we look at full-grown population, women tend to out-number men very considerably (by 5 or 6%) given symmetric care. However, when women receive less care in terms of medical attention, nutritional arrangements and so on, women's mortality rates are artificially elevated in comparison with men. As a result, in a number of countries across Asia and North Africa, there are fewer women than men. In China there are six percent fewer women than men; in India seven percent fewer; in Pakistan nine percent fewer. This is not a biological difference. For example, in any part of these societies where women do receive symmetric care, we see similar patterns of survival as in Western Europe and North America. For example, the ratio of women to men is similar in Kerala in India (about 5% more) as it is in Europe and North America (and would have been almost exactly the same if we discount the greater male mortality in the wars fought by Europeans and Americans in the past). The number of "missing women" estimates the millions of women who would have been there if the mortality rates of women, compared with male mortality rates, were what we would expect had they received systematic care. This tends to produce a massive number of "missing women." The figure of 100 million that you mention comes from that. There have been other -- more conservative -- estimates following mine, including a much smaller figure by Professor Ansley Coale, but his figure too is 60 million
"missing women." Another more intermediate figure presented by Dr. Stefan Klasen places it around 90 million. No matter which particular technical estimate we accept, these are very large numbers and reflect a striking aspect of the most elementary deprivation suffered by women in a very substantial part of the world.

It is important to recognize that this is not just a matter of poverty. In sub-Saharan Africa, while the ratio of women to men is not as high as in North America or Europe (or as in Kerala in India), still there are 2% more women than men. Indeed my 100 million figure was based on taking sub-Saharan Africa as the "standard" in calculating the number of "missing women" (in contrast with what would have been the case had the ratio of female-to-male survival rates been the same in Asia or North Africa as it is in sub-Saharan Africa).

Development as Freedom is a general exposition of the economic ideas and analyses of Amartya Sen, winner of the 1998 Nobel Prize in Economic Science. This brilliant and indispensable treatise compellingly analyzes the nature of contemporary economic development from the perspective of human freedom. Freedom, Sen persuasively argues, is at once the ultimate goal of economic life and the most efficient means of realizing general welfare. It is a good to be enjoyed by the world's entire population. Drawing on moral and political philosophy and technical economic analysis, this work gives the nonspecialist reader powerful access to Sen's paradigm-altering vision and vividly shows how he, in the words of the Nobel Prize committee, has both "restored an ethical dimension to the discussion of economic problems" and "opened up new fields of study for subsequent generations of researchers."

To a world divided between those who fear the ruthlessness of the free market under prevailing conditions of global capitalism and those who fear the terror of authoritarian states that stifle indi-
vidual liberty as well as initiative, Development as Freedom presents a necessary intellectual and moral framework of analysis and scrutiny. By rigorously addressing one of the largest questions of all--"What is the relation between our economic wealth and our ability to live as we would like?"--Sen allows economics once again, as it did in the time of Adam Smith, to address the social basis of individual well-being and freedom. He also confronts the human dilemma that "despite unprecedented increases in overall opulence, the contemporary world denies elementary freedoms to vast numbers--perhaps even the majority--of people." This is a landmark work that shows how in individual human freedom--the exclusive possession, Sen shows, of no particular nation, region or historical, intellectual or religious tradition--lies the capacity for political participation, economic development and social progress.