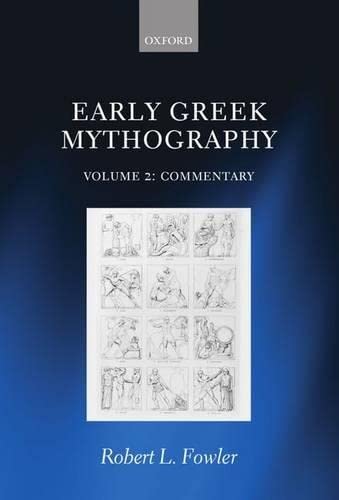 Greek mythology is known to us from various artistic and literary sources. Of the latter, the poetic sources (such as Homer and tragedy) are familiar to many readers, but the prose sources are much less so. Early Greek Mythography: Volume 2 is a detailed commentary on the texts of Early Greek Mythography: Volume 1, which provided a critical edition of the twenty-nine authors of this genre of Greek prose from the late sixth to the early fourth centuries BC.

After a general introduction, this volume offers in its first part a mythological commentary on the texts, arranged according to the major topics of Greek mythology (the Trojan Cycle, Herakles, the Argonauts, etc.). The aim is to recover, so far as possible, what each writer said about the stories, with full consideration of their historical context and significance for Greek literature, mythology, and religion. The synoptic, topic-by-topic approach allows all the fragments pertinent to any given myth to be treated together, so that one can more easily identify variants and trends, and plot the history of the myth. The second part of the volume is a philological commentary on the separate authors, discussing their life, works, and contribution to the genre, as well as textual problems and non-mythological questions raised by individual fragments.

Robert L. Fowler is the Henry Overton Wills Professor of Greek at the University of Bristol.

"This comprehensive, meticulous, and beautifully produced commentary will be of great use to students and scholars of mythography, historiography, and ancient religion and to anyone seeking to understand the complexity of our evidence for Greek mythology. Every university library should have a copy, as it is an important reference tool for a variety of fields." --Mnemosyne

Shipping: US$ 13.30
From United Kingdom to U.S.A.
Destination, rates & speeds