Items related to The Politics of the British Army

Strachan, Hew The Politics of the British Army

The Politics of the British Army 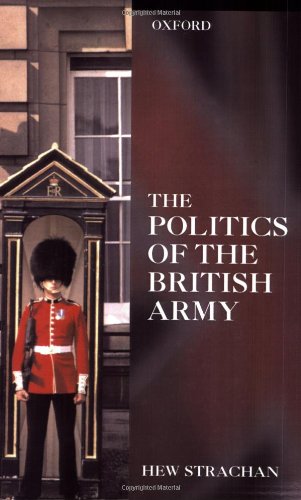 The British Army sees itself as politically neutral. Hew Strachan examines its history since 1660 and reveals that this is a facade. Despite the fact that the British Army - unlike many other armies - has never staged a coup d'état, it is an inherently political entity, embedded in the fabric of the state, and intimately involved in the formation and implementation of policy. Professor Strachan goes on to show how this involvement is necessary and argues that a genuinely apolitical British Army would be a less effective contributor to the management of Britain's defense.

`thought-provoking study ... this controversial book contains interpretations which some will contest ... and which deserve to be tested in debate and discussion. It looks afresh at some well-dug ground in a way that is both informative and highly stimulating.'
John Gooch, History, January 2000

`most interesting and thought-provoking book'
Bob Wyatt, The Bulletin of the Military Historical Society

`Looks afresh at some well-dug ground that is both informative and highly stimulating.'
John Gooch, History Vol.85 No.277

`fascinating and important book ... It is a great pleasure to read the work of an academic who really knows the flesh of his subject and not just the bones. If only more studies benefited from such clarity of thought and prose.'
Antony Beevor, The Daily Telegraph

`an interesting and entertaining book, full of fascinating details about what went on behind the scenes ... This is a stimulating book, full of lively revelations which throw new light on old controversies, such as the enmity between 'Frocks' and 'Brass Hats' in the First World War.'
Michael Carver, The Society for Army Historical Research, Vol lxxvii no311 Autumn 1999

1. The Politics of the British Army