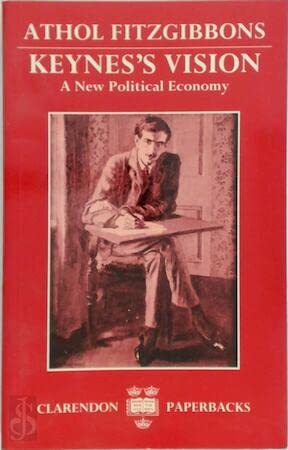 In this readable yet scholarly reevaluation of the thought of John Maynard Keynes, Fitzgibbons traces the great economist's vision as it developed from his early philosophical writings (including many unpublished or neglected works) through the Collected Writings. Focusing on how Keynes understood significant political and economic matters, Fitzgibbons charts the evolution of his system of political economy, provides fresh insights into his approach to economic policy, and challenges the view of Keynes as a political liberal.

'tremendously thoughtful and scholarly analysis of Keynes's writings ... The sign of a good book is that it initiates debate; we are in Fitzgibbons's debt for focusing our attentiion on a subject of fundamental importance and for providing such a firm foundation for further debate.' Sheila Dow, University of Stirling. The Manchester School of Economic and Social Studies 'short, elegant and strikingly original book' Financial Times ' This is a book in the heroic tradition and it bucks a trend in the profession which increasingly casts Keynes as villain ... Fitzgibbon's book is extremely valuable in bringing out the coherent vision of Keynes which can be found in these and other parts of his works.' Times Higher Education Supplement

Book Description Oxford University Press, 1990. Condition: Good. Ships from Reno, NV. Shows some signs of wear, and may have some markings on the inside. Seller Inventory # GRP97252958

Book Description Oxford University Press, 1990. Condition: Good. A+ Customer service! Satisfaction Guaranteed! Book is in Used-Good condition. Pages and cover are clean and intact. Used items may not include supplementary materials such as CDs or access codes. May show signs of minor shelf wear and contain limited notes and highlighting. Seller Inventory # 0198283202-2-4

Book Description Clarendon Press, 1990. Paperback. Condition: Very Good. Keynes' Vision: A New Political Economy (Clarendon Paperbacks) This book is in very good condition and will be shipped within 24 hours of ordering. The cover may have some limited signs of wear but the pages are clean, intact and the spine remains undamaged. This book has clearly been well maintained and looked after thus far. Money back guarantee if you are not satisfied. See all our books here, order more than 1 book and get discounted shipping. Seller Inventory # 7719-9780198283201

Shipping: US$ 2.62
From United Kingdom to U.S.A.
Destination, rates & speeds