Items related to Nature's Building Blocks: An A-Z Guide to the Elements

Nature's Building Blocks: An A-Z Guide to the Elements 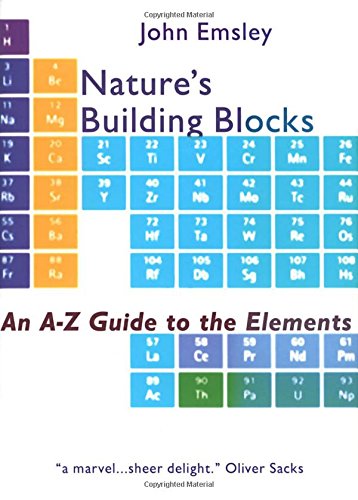 What is the most common element in the universe? Can you name the noble gases? Everything we see around us is made of chemical elements, but most of us know little about them.
Penned by award-winning science writer John Emsley, Nature's Building Blocks explains the what, why and wherefore of the chemical elements. Arranged alphabetically, from Actinium to Zirconium, it is a complete guide to all 115 of those that are currently known, with more extensive coverage of those elements we encounter in our everyday life. The entry on each element reveals where it came from, what role it may have in the human body, and the foods that contain it. There are also sections on its discovery, its part in human health or illness, the uses and misuses to which it is put, and its environmental role. Readers discover that the Earth consists of around 90 elements, some of which are abundant, such as the silicon and oxygen of rocks and soils, while some are so rare that they make gold seem cheap. Our own bodies contain about 30 elements, some in abundance, some in trace amounts; some vital to our health, and some that are positively harmful. A list of the main scientific data, and outline properties, are given for every element and each section ends with an "Element of Surprise," which highlights some unexpected way in which each element influences our everyday life.
Both a reliable reference source and a high browsable account of the elements, Nature's Building Blocks offers a pleasurable tour of the very essence of our material world.

John Emsley is Science Writer in Residence at the University of Cambridge. Author of the highly popular "Molecule of the Month" column for The Independent and of the book Molecules in an Exhibit, he has received both a Glaxo Award for science writing and the Chemical Industries Association's President's Award for science communication. He lives in London.

"A marvel--encyclopedic in scope, but so full of enthusiasm, so engagingly written, that one can open it at any point and read for sheer delight.... I have read and possess many books on the elements, but it is Dr. Emsley's new book which will now sit next to me on my desk."--Oliver Sacks
"Emsley's colorful account of all the elements in the universe is a succinct history of everything.... Emsley drew on 20 years of collected magazine and newspaper articles to produce this marvelous reference work. 'Nature's Building Blocks' is the kind of book people consult in the pursuit of a single fact, but this fact will lead to another and another, drawing the reader in an enjoyable chase from naturally occurring nuclear reactors to human zinc deficiency and on to the number of elements named for one small town in Sweden (four)."--New York Times Book Review
"From actinium to zirconium, Emsley marshals the details into a well-organized, user-friendly reference about every little thing that makes up every big thing that makes up the universe as we know it.... A quite useful and even fascinating book in its own way, a lot of fun to flip through during idle moments."--San Francisco Chronicle
"Amusing and finely crafted.... The most amusing sections of the book are the text boxes and the little parting shots at the end of each chapter, the 'Elements of surprise'.... The elements come alive through stories and anecdotes. Emsley has cast his net wide and drawn on a huge range of material--this is a book for browsing almost at random.... The more general reader will find plenty to be intrigued and amused by.... A fine, amusing and quirky book that will sit as comfortably on an academic's bookshelf as beside the loo, to be browsed and savored in idle moments."--Nature

1. Nature's Building Blocks: An A-Z Guide to the Elements

2. Nature's Building Blocks: An A-Z Guide to the Elements

3. Nature's Building Blocks: An A-Z Guide to the Elements