Items related to Shapes: Nature's Patterns: A Tapestry in Three... 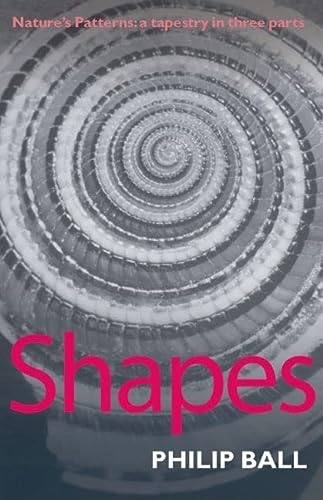 Patterns are everywhere in nature - in the ranks of clouds in the sky, the stripes of an angelfish, the arrangement of petals in flowers. Where does this order and regularity come from? It creates itself. The patterns we see come from self-organization. Whether living or non-living, scientists have found that there is a pattern-forming tendency inherent in the basic structure and processes of nature, so that from a few simple themes, and the repetition of simple rules, endless beautiful variations can arise.

Part of a trilogy of books exploring the science of patterns in nature, acclaimed science writer Philip Ball here looks at how shapes form. From soap bubbles to honeycombs, delicate shell patterns, and even the developing body parts of a complex animal like ourselves, he uncovers patterns in growth and form in all corners of the natural world, explains how these patterns are self-made, and why similar shapes and structures may be found in very different settings, orchestrated by nothing more than simple physical forces. This book will make you look at the world with fresh eyes, seeing order and form even in the places you'd least expect.

Philip Ball is a freelance writer and a consultant editor for Nature, where he previously worked as an editor for physical sciences. He is a regular commentator in the scientific and popular media on science and its interactions with art, history and culture. His ten books on scientific subjects include The Self-Made Tapestry: Pattern Formation in Nature, H2O: A Biography of Water, The Devil's Doctor: Paracelsus and the World of Renaissance Magic and Science, and Critical Mass: How One Thing Leads To Another, which won the 2005 Aventis Prize for Science Books. He was awarded the 2006 James T. Grady - James H. Stack award by the American Chemical Society for interpreting chemistry for the public. Philip studied chemistry at Oxford and holds a doctorate in physics from the University of Bristol. His latest book The Music Instinct published in February 2010.

"Highly recommended. Ball is an inspired generalist who is able to take different intellectual and academic perspectives, as well as wildly divergent natural phenomena, and weave them into a coherent tapestry that will serve the professional and the casual reader alike. The writing is both precise and readable, and the generous illustrations are fascinating, informative, and consistently well done. Although a number of works like this have been published in recent years, few have been of similar quality. These three volumes are a worthwhile addition to any library collection."--Choice

"From the curl of a ram's horn to patterns of spider webs and the development of an embryo, Mr. Ball examines the possible causes of the shapes and forms we observe...a lot of fascinating detail about the different physical, chemical and evolutionary processes at work."--The Economist
"Provide[s] a window into all that's fascinating in nature, skimming from pattern to pattern in prose and history, shedding light on the physical and chemical forces behind nature's tapestry without losing readers in the math." --Seed Magazine