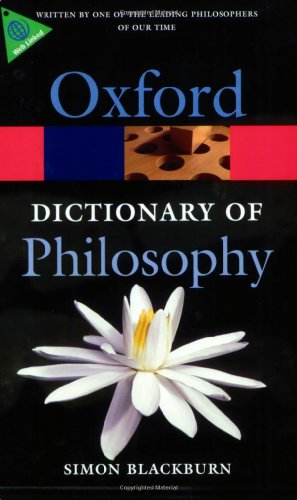 The Gambler's Fallacy, the Dirty Hands Argument, Pascal's Wager--philosophical terms can be both intriguing and baffling. Now, eminent philosopher Simon Blackburn offers the most authoritative and up-to-date dictionary of philosophy available in a single volume. Ranging from Aristotle to Zen, the two thousand plus entries cover the entire span of philosophy, from the Vedas (written over three thousand years ago) to the most recent technical terminology, with ample coverage of important themes from Chinese, Indian, Islamic, and Jewish philosophy. Here are all the terms one would expect to find in a comprehensive dictionary of philosophy--idealism and empiricism, ethics and aesthetics, Epicureanism and Stoicism, existentialism and logical positivism, and much more. Blackburn also defines many concepts not normally found in such reference works, including entries for apathy, laughter, and the meaning of life, and he includes relevant terms from disciplines such as mathematics, physics, biology, artificial intelligence, and linguistics. In addition, there are capsule biographies of nearly five hundred individuals, from the pre-Socratics to such contemporary figures as Jacques Derrida, Michel Foucault, Richard Rorty, and Simone de Beauvoir.

Simon Blackburn is Professor of Philosophy at the University of Cambridge. He was a Fellow and Tutor at Pembroke College, Oxford from 1969 to 1990. Best-selling author of Being Good: A Short Introduction to Ethics, and Think: A Compelling Introduction to Philosophy, he also edited the journal Mind from 1984 to 1990.

In his preface to the first edition, reprinted here, the author states that his "own interests and assessments are not always disguised." This is true of the second edition as well, providing such delicious morsels as, in the entry on Jacques Derrida, "Derrida's work . . . is not easily assimilated by people used to normal expressions of thought." Nevertheless, the vast majority of entries are admirably objective. Blackburn's preference is for--and expertise lies in--the branch of the Western philosophical tradition culminating in academic Anglo-American philosophy.

Although the book jacket claims this to be a "vastly expanded second edition, with over 500 new entries," there is no indication in the new preface or elsewhere what these new entries are. The page count has not altered significantly from the first edition. More than 500 of the new edition's more than 3,000 entries are biographical, including non-Western thinkers such as Confucius and Kitaro Nishida and nonphilosophers such as Dante and Freud. Among the terms covered are Apathy, Capitalism, Environmental ethics, Hedonism, Hatha-yoga, Taoism, Ontology, Self-deception, Turing machine, Vedanta, Whig view of history, and Welfare. Entries range in length from a sentence (e.g., Formal implication, Free variable) to nearly two pages (e.g., Kant, Immanuel). There is extensive cross-referencing within and between the lucid entries. Concluding the volume are an appendix of logical symbols and a chronology of important philosophical and other cultural dates.

The second edition's jacket quotes the Times Literary Supplement on the first edition: "the most comprehensive dictionary of philosophy in English." This is no longer true and was perhaps untrue even in 1996. In the last 10 years, a variety of excellent -single-author and multiple-author one-volume philosophical dictionaries, encyclopedias, and "companions" have become available (not to mention far more extensive print and Internet references). Each offers entries and viewpoints not found in any of the others so it makes good sense to have more than one. The Oxford Dictionary of Philosophy is an excellent choice for public and academic libraries. Craig Bunch
Copyright © American Library Association. All rights reserved