Items related to Mind as Machine: A History of Cognitive Science

Boden, Margaret Mind as Machine: A History of Cognitive Science

Mind as Machine: A History of Cognitive Science 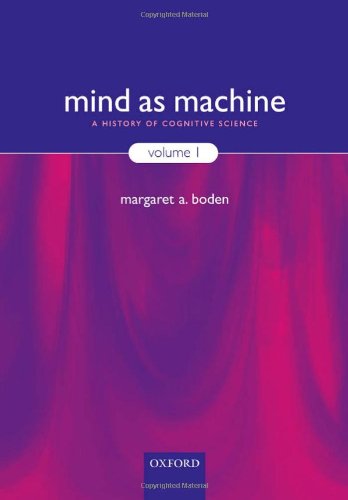 The development of cognitive science is one of the most remarkable and fascinating intellectual achievements of the modern era. The quest to understand the mind is as old as recorded human thought; but the progress of modern science has offered new methods and techniques which have revolutionized this enquiry. Oxford University Press now presents a masterful history of cognitive science, told by one of its most eminent practitioners.

Cognitive science is the project of understanding the mind by modeling its workings. Psychology is its heart, but it draws together various adjoining fields of research, including artificial intelligence; neuroscientific study of the brain; philosophical investigation of mind, language, logic, and understanding; computational work on logic and reasoning; linguistic research on grammar, semantics, and communication; and anthropological explorations of human similarities and differences. Each discipline, in its own way, asks what the mind is, what it does, how it works, how it developed - how it is even possible. The key distinguishing characteristic of cognitive science, Boden suggests, compared with older ways of thinking about the mind, is the notion of understanding the mind as a kind of machine. She traces the origins of cognitive science back to Descartes's revolutionary ideas, and follows the story through the eighteenth and nineteenth centuries, when the pioneers of psychology and computing appear. Then she guides the reader through the complex interlinked paths along which the study of the mind developed in the twentieth century. Cognitive science, in Boden's broad conception, covers a wide range of aspects of mind: not just 'cognition' in the sense of knowledge or reasoning, but emotion, personality, social communication, and even action. In each area of investigation, Boden introduces the key ideas and the people who developed them.

No one else could tell this story as Boden can: she has been an active participant in cognitive science since the 1960s, and has known many of the key figures personally. Her narrative is written in a lively, swift-moving style, enriched by the personal touch of someone who knows the story at first hand. Her history looks forward as well as back: it is her conviction that cognitive science today--and tomorrow--cannot be properly understood without a historical perspective. Mind as Machine will be a rich resource for anyone working on the mind, in any academic discipline, who wants to know how our understanding of our mental activities and capacities has developed.

Margaret A. Boden is Research Professor of Cognitive Science at the University of Sussex. She is a Fellow (and past Vice-President) of the British Academy, and of the American Association for Artificial Intelligence (and its British and European equivalents), and a member of the Academia Europaea. In 2002 she was awarded an OBE for services to Cognitive Science, and she holds a Cambridge ScD as well as honorary doctorates from Bristol, Sussex, and the Open University. Educated at Cambridge and Harvard, her earlier degrees were in medical sciences, philosophy, and psychology. She has lectured around the world, and her work has been translated into 18 languages. She has two children, and three grandchildren.

"A beautifully written book, not just for specialists but for anyone interested in the questions of mind and its workings."--CHOICE
"A triumphant literary event among histories of cognitive science"--Igor Aleksander, Journal of Consciousness Studies
"A monumental new history of cognitive science--scholarly, readable, and even entertaining--an invaluable resource. At present it has no rival, and it is hard to imagine any other work that could so completely document the intellectual ferment of the past fifty years."--Michael C. Corballis, Times Literary Supplement

Mind as Machine: A History of Cognitive Science