Items related to The ESC Textbook of Cardiovascular Medicine: Hardback...

The ESC Textbook of Cardiovascular Medicine: Hardback with Online Access 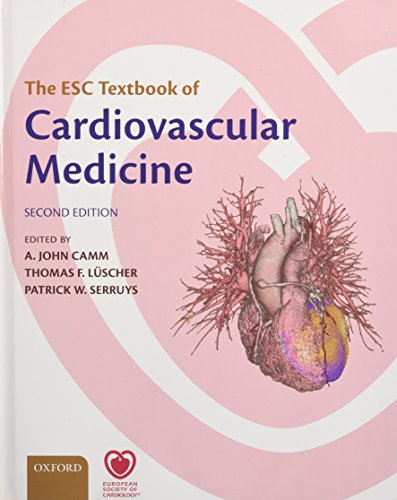 The ESC Textbook of Cardiovascular Medicine is the definitive reference work for every cardiology trainee, general cardiologist, and specialist cardiologist as they develop their core knowledge of the subject. Based on the Core Curriculum of the European Society of Cardiology (ESC), this resource contains much of the evidence base of the subject, and reflects ESC guidelines, Task Force reports and scientific statements, which guide current practice. The second edition also features significant new chapters on specific context-based heart disease.

The ESC Textbook of Cardiovascular Medicine comprises 38 sections flowing from the clinical presentation of the patient and initial investigations, through comprehensive descriptions of disease processes and pathophysiological states, and finally to the complex interrelationship between the heart and the mind. Each section begins with a summary of the chapter featuring key learning points, and ends with personal reflections from the authors about the standing of their subject and its likely development during the next half decade. Such comprehensive coverage of the subject area makes The ESC Textbook of Cardiovascular Medicine the must-have, must-use resource for everyone currently working in the field.

The online version of The ESC Textbook of Cardiovascular Medicine contains the full text of the print edition (which can be browsed by the contents list, the index, or searched), links from references in the text to external sources (via PubMed, ISI, and CrossRef), and all figures and illustrations from the print edition, downloadable into PowerPoint. In addition, the online version also provides multiple-choice questions, which can be completed to gain European Board of Accreditation in Cardiology (EBAC)-accredited CME points, as well as over 200 additional high-quality videos of procedures and techniques, exclusive to the online edition.

Professor John Camm qualified in 1971. He worked at Guy's Hospital before working at St. Bartholomew's Hospital, London. In 1986 he moved to St. George's Hospital Medical School in London as Professor of Clinical Cardiology (British Heart Foundation). Professor Camm was elected the Chairman of Medicine in October 1990, a post rotated from in 1995. He is now the Chairman of the Division of Cardiac and Vascular Sciences at St. George's University of London. His major speciality is cardiac arrhythmias but he is also much involved in clinical cardiac electrophysiology, cardiac pacemakers, risk stratification in post myocardial infarction, heart failure and cardiomyopathy patients. He has a major interest in cardiovascular safety of cardiac and non-cardiac drugs. John has given over 1500 lectures to national and international audiences, written more than 1000 peer review papers and over 250 detailed reviews. He has authored and edited numerous books.

Professor Thomas Lüscher, Chairman of the Department of Medicine and Cardiology at Zurich, is the new Editor-in-Chief of the European Society of Cardiology flagship peer review journal, European Heart Journal. He has held many successful positions with the ESC including chairing the ESC Working Group on Coronary Circulation, the Congress Programme Committee 2002-3 and has equally been the Vice-President of the ESC Working Groups for two years. He turned to cardiology at 24 after witnessing a case of sudden cardiac death in his father's office, is not only an interventional cardiologist but also a keen researcher studying the genetics of atherosclerosis in animal models and the role of endothelial as well as inflammatory cells in vascular dysfunction and coronary occlusion. He is involved in multicentre studies looking into the mechanisms of new drugs on vascular dysfunction in Zurich or stents that attract stem cells as proof-of-concept trials with limited patients.

Professor Serruys is Professor of Interventional Cardiology and Head of Interventional Department at Erasmus MC University Medical Center, Rotterdam. His primary research interests are coronary artery disease and interventional cardiology, for which he received numerous awards. He is also a Fellow of the European Society of Cardiology and the American College of Cardiology, and a member of the Scientific Council of the International College of Angiology. He is Associate Editor of Circulation and serves on the editorial boards of several other journals. Professor Serruys has published more than 1300 papers and co-edited 31 books.

Review from previous edition: "One of its remarkable achievements in addition to the high standard of writing is its superb illustrations, figures, and tables that appear on virtually every page."

"One of the most valuable features of The ESC Textbook of Cardiovascular Medicine is the electronic version......"

"A novel feature introduced by the accrediting body, EBAC, is the provision of high-quality continuing medical education for cardiologists and trainees after specified chapters with multiple choice questions relating to the chapter's content."

1. The ESC Textbook of Cardiovascular Medicine: Hardback with Online Access

2. The ESC Textbook of Cardiovascular Medicine: Hardback with Online Access