Items related to About the Speaker: Towards A Syntax Of Indexicality...

Giorgi, Alessandra About the Speaker: Towards A Syntax Of Indexicality (Oxford Studies In Theoretical Linguistics)

About the Speaker: Towards A Syntax Of Indexicality (Oxford Studies In Theoretical Linguistics) 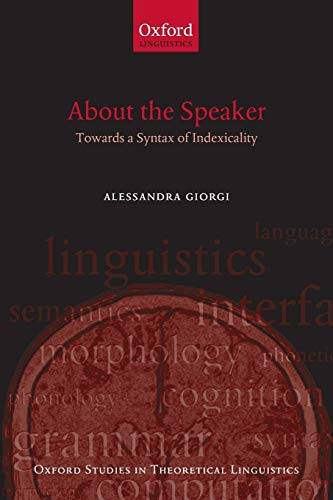 This book considers the semantic and syntactic nature of indexicals - linguistic expressions, as in I, you, this, that, yesterday, tomorrow, whose reference shifts from utterance to utterance.There is a long-standing controversy as to whether the semantic reference point is already present as syntactic material or whether it is introduced post-syntactically by semantic rules of interpretation. Alessandra Giorgi resolves this controversy through an empirically grounded exploration of temporal indexicality, arguing that the speaker's temporal location is specified in the syntactic structure. She supports her analysis with theoretical and empirical arguments based on data from English, Italian, Chinese, and Romanian. Professor Giorgi addresses some difficult and longstanding issues in the analysis of temporal phenomena - including the Italian imperfect indicative, the properties of the so-called future-in-the-past, and the properties of Free Indirect Discourse - and shows that her framework can account elegantly for all of them. Carefully argued, succinct, and clearly written her book will appeal widely to semanticists in linguistics and philosophy from graduate level upwards and to linguists interested in the syntax-semantics interface.

Alessandra Giorgi is Professor of Linguistics, University of Venice. Her recent publications include articles and chapters on the syntax and semantics of anaphoric expressions. She is the author of The Syntax of Noun Phrases (CUP, 1991) and Tense and Aspect: from Semantics to Morphosyntax (OUP, 1997).

2. About the Speaker: Towards a Syntax of Indexicality (Oxford Studies in Theoretical Linguistics)

3. About the Speaker. Towards a Syntax of Indexicality.

Shipping: US$ 24.65
From Netherlands to U.S.A.
Destination, rates & speeds