Items related to Literature: An Introduction to Reading and Writing,... 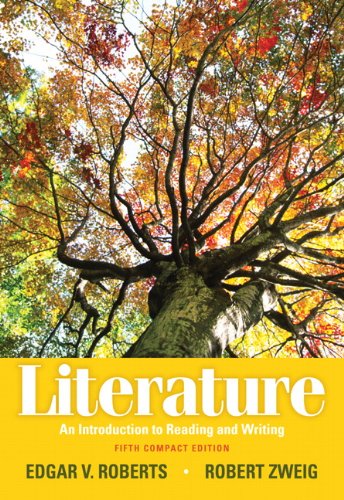 Literature: An Introduction to Reading and Writing, Compact Edition is founded on the principles of writing about literature.  It is not an afterthought and it is not treated as a separate chapter or appendix; but rather, it is the carefully integrated philosophy of Professor Roberts’ approach to teaching literature and composition.

Complete coverage of writing about each element and a total of 28 MLA-format student essays with accompanying commentary ensure student comprehension of writing about literature and therefore, produce better student papers.

He served in the U.S. Army in 1946 and 1947, seeing duty in Arkansas, the Philippine Islands, and Colorado.

He published articles about the plays of Henry Fielding, the subject of his Ph.D. dissertation. In 1968 he published a scholarly edition of John Gay's The Beggar's Opera (1728), and in 1969 he published a similar edition of Fielding's The Grub-Street Opera (1731), both with the University of Nebraska Press. He first published Writing About Literature (then named Writing Themes About Literature) in 1964, with Prentice Hall. Since then, this book has undergone eleven separate revisions, for a total of twelve editions. In 1986, with Henry E. Jacobs of the University of Alabama, he published the first edition of Literature: An Introduction to Reading and Writing. After Professor Jacobs's untimely death in the summer of 1986, Professor Roberts continued working on changes and revisions to keep this text up to date. The Ninth Edition was published early in 2009, with Pearson Longman. The Fourth Compact Edition of Literature: An Introduction to Reading and Writing was published in 2008.

Professor Roberts is an enthusiastic devoté of symphonic music and choral singing, having sung in local church choirs for forty years. Recently he has sung (bass) with the New Choral Society of Scarsdale, New York (where he lives), singing in classic works by Handel, Beethoven, Bruckner, Bach, Orff, Britten, Brahms, and others. He is a fan of both the New York Mets and the New York Yankees. When the two teams play in inter-league games, he is uneasy because he dislikes seeing either team lose. He also likes both the Giants and the Jets. He has been an avid jogger ever since the early 1960s, and he enjoys watching national and international track meets.

Professor Roberts encourages queries, comments, and suggestions from students who have been using any of the various books. Use the following email address: edgar.roberts@verizon.net.

Robert Zweig is a tenured, full professor at Manhattan Community College of the City University of New York.  He teaches courses in Literature and Writing and for many years was the Intensive Writing Coordinator for the college.

He has a doctorate in English Literature from the City University of New York, a Masters from Queens College in creative writing and a bachelor’s degree from Queens College in English literature.  Dr. Zweig has numerous peer-reviewed publications in journals, encyclopedias and books.  In addition, he is currently writing two textbooks for McGraw-Hill on the writing process, due out in 2011, another textbook, Grammar in the Modern World (Pearson) due out in 2011 and is co-author of Literature: An Introduction to Reading and Writing, a bestselling introduction to literature textbook by Longman Publishers.  His translations of the Italian poet and Nobel Laureate Eugentio Montale appear in this text.

Also, Dr. Zweig has lectured extensively throughout the United States and Italy on Victorian Literature, Poetics and contemporary culture. Some of the American universities he has addressed include Notre Dame, New York University, University of California, Harvard, University of Illinois, University of Delaware, Rutgers University and the Graduate Center of the City University of New York,

He has received several scholarships and awards, including a Mellon Fellowship and the Phi Beta Kappa award for “Outstanding Teaching Skills” as one of the Top Ten Professors at Manhattan Community College.