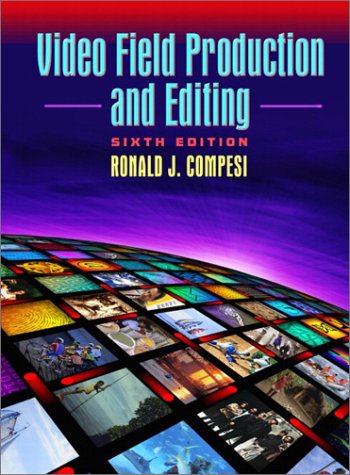 Key Benefit: This book focuses on production techniques and technology appropriate for single camera electronic field production (EFP) and electronic news gathering (ENG). Key Topics: While providing descriptions of larger scale production and equipment, the book clearly and comprehensively discusses professional production involving a minimum amount of field equipment and a small production crew in a practical, how-to manner. Completely updated, this new edition takes advantage of the many new innovations in technology and technique of the past few years, including full coverage of CCD's, camcorders, and new analog and digital video recording formats. Each chapter begins with a step-by-step discussion of the equipment and its use, and then moves on to discuss its aesthetic properties and possibilities. Market: For professionals working in video field production and editing.

Dr. Ronald Compesi is Professor Emeritus in the Broadcast and Electronic Communication Arts Department at San Francisco State University where he taught for 38 years. In 2007, he was recognized as the outstanding Media Arts professor in the California State University System. Dr. Compesi’s primary teaching and research interests are in the areas of video production and editing, and media ethics. Dr. Compesi is author of Video Field Production and Editing, 7th edition (Boston: Allyn and Bacon, 2007). In print since 1985, this text is one of the leading college textbooks on the topic in use today in the U.S. and Canada. A Chinese language translation was published by the Beijing Broadcasting University (now the Communication University of China) in 2003. Dr. Compesi is co-author of Introduction to Video Production: Studio, Field and Beyond (Boston: Allyn and Bacon, 2006). Dr. Compesi has published scholarly articles and book reviews in the Journal of Broadcasting and Electronic Media (JOBEM), Public Telecommunications Review and Journalism Quarterly. At the University of Oregon, Dr. Compesi worked for the Division of Broadcast Services and Televised Instruction and as a Producer/Director for the UO Honors College. He was a principal in the independent production company Windward Communication Design. From 1993-2003, Dr. Compesi served as co-executive producer for a variety of special television programs produced for KTVU (Fox, Channel 2, Oakland, CA) television’s Family to Family and Bay Area People community affairs series. Dr. Compesi has held a number of administrative appointments at San Francisco State University, including Chair of the Broadcast & Electronic Communication Arts Department (1986-1995), Associate Dean of the College of Creative Arts (2006-2008), 1984-1985), Interim Director of the School of Music and Dance (2004-2005) and Interim Dean of the College of Creative Arts (2006-2008).