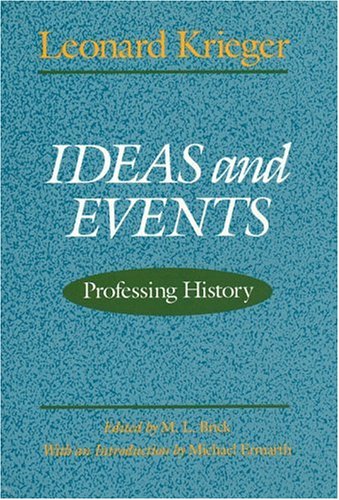 Leonard Krieger has long been revered as a contemporary master historian. With an eye toward placing his critical achievements before an expanded readership, he helped compile this core collection of his most important essays. Together these essays bring under a single cover the key themes and ideas of his life's work to serve as a handbook for intellectual history and historians of every stripe.

This book reflects Krieger's conviction that the value of intellectual history is as a source of orientation in a world of information overload. In Krieger's hands, intellectual history has stressed "thinking-through" the relations between ideas and events rather than the compilation and recapitulation of mere facts and historical categories.

The essays in this collection cover a range of topics, including history of ideas, intellectual history, early modern political history, German political history, Hegel, Marx, and more. Many of these essays are already classics of historical scholarship. With the demise of the Soviet Union and state-sponsored Marxism, and with the reunification of Germany, Krieger's history takes on new relevance and a renewed importance.

With a splendid introduction by Michael Ermath, and an extensive bibliography of Krieger's most important books and essays, this is a "must read" for every serious student of modern history.

Leonard Krieger was University Professor Emeritus in the Department of History at the University of Chicago until his death in 1990.

This weighty volume collects 18 substantial essays by the recently deceased Krieger, an intellectual historian who was a professor at the University of Chicago until his death in 1990. The essays, appearing originally in various scholarly journals since the 1950s, together reflect the major themes and concerns of Krieger's prolific and influential career. They are arranged into six broad categories: 1) history of ideas (freedom and authority); 2) history of intellectuals (Hegel, Sartre, Arendt, and others); 3) intellectual history (diverse modern "isms"); 4) history and natural law (Pufendorf, Kant, and others); 5) Marx, Engels, and history; and 6) 20th-century Germany (especially Nazism as continuity or aberration). The volume also contains a full bibliography of Krieger's works. All the essays are rich challenges for academics, though they are not likely to find many readers among public library browsers. Recommended for academic libraries.
- James B. Street, Santa Cruz P.L., Cal.
Copyright 1992 Reed Business Information, Inc.