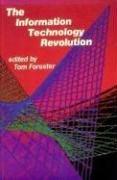 "If the automobile and airplane business had developed like the computer business, a Rolls Royce would cost $2.75 and would run for 3 million miles on one gallon of gas. And a Boeing 767 would cost just $500 and would circle the globe in 20 minutes on five gallons of gas." Tom Forester's comparison points up the dramatic reduction in the cost of computing and this collection of essays he has assembled unfolds the equally dramatic changes that the revolution in electronics, computing, and telecommunications has brought about in the way we live and work-and maybe even think.

The Information Technology Revolution emphasizes actual case studies and much of the material has been written by computer engineers in the front line of technological change. Extensive chapters deal with the revolution in telecommunications, artificial intelligence and the "fifth generation" of supercomputers, the rise of the personal computer and the use of information technology in schools, factories, offices, banks, shops, and hospitals.

Among the social issues discussed are computer crime, privacy, the impact of new technology on women, the Third World, 'smart' weapons, and the future of work itself. A final section of the book assesses the extent to which this revolution is transforming Western society.

The Information Technology Revolution is a sequel to Forester's edited collection The Microelectronics Revolution (MIT Press paperback, 1980). It contains entirely new material published between 1980 and 1984. Chapters are presented as in the earlier book: an introductory article is usually followed by either detailed case studies or pieces that explore some of the issues in greater depth - a format particularly useful for teaching purposes. Comprehensive guides to further reading follow each chapter.

Tom Forester is a Lecturer in the, Division of Science and Technology at Griffith University in Australia. He is editor of The The Microelectronics Revolution and The Information Technology Revolution and author of High Tech Society.