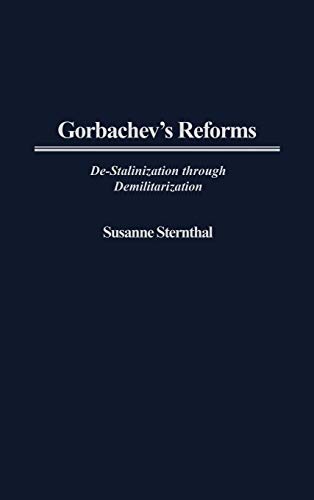 Gorbachev's reforms in domestic and foreign policy were motivated by the overriding objective of making Soviet socialism a legitimate and viable alternative among the world community of nations. Drawing on recently opened archives, this study examines the radicalization of Gorbachev's reforms and the resistance to them from the conservatives in the party apparat and the military. Gorbachev sought to demilitarize the Soviet Union from the beginning but that process took on a more revolutionary hue as he came to understand how deeply embedded Stalinism was. He sought to continue where Lenin had left off, believing that Stalin had sidetracked and deformed Soviet socialism. Toward this end, Gorbachev redefined the image of the enemy by emphasizing common human values in international relations over class conflict, and altered the nature of the threat by stressing the primacy of economic over military competition. Gorbachev changed the terms of political discourse, and by changing the way in which the Soviet Union viewed the world, he sought to make improvements in relations with the West and to decrease the military burden of his overstretched country.

Analyzes the radicalization of GorbacheV's domestic and foreign policy reforms and the conservative opposition to them.

SUSANNE STERNTHAL is an independent scholar. She has worked as a journalist, translator, and consultant, and has participated in a joint-venture project in telecommunications in Russia. She received her B.A. with honors from the University of Michigan and her M.A. and M.Phil. from Columbia University.