Items related to Pacific Nightmare: A Third World War in the Far East

Pacific Nightmare: A Third World War in the Far East 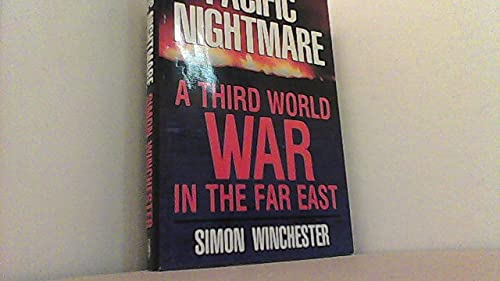 A fictional account of what could occur in the volatile Far East.

Hong Kong resident Winchester--a Manchester Guardian correspondent whose nonfiction Their Noble Lordships (1982) and Pacific Rising (1991) dished up the House of Lords and the Pacific Rim respectively--treats the breakup of China as future historical fiction. Odd, but it works--and quite well. Presumably because Americans are too busy fearing Japan to have time to worry about China, the publisher is billing Winchester's first novel as being about ``How Japan Starts World War III.'' It's not. It's a thoroughly readable and well-studied scenario for the collapse of China-as-we-know-it following Britain's 1997 handover of Hong Kong to the People's Republic. The disintegration begins with the Peking gerontocracy reneging on their promise to install a native governor in the former crown colony, sending instead a Maoist hard-liner from the puritanical north. The move backfires, thanks to advance notice of the treachery by government dissidents. Meanwhile, a Reuters correspondent--the channel from the progressive wing of the Peking foreign ministry to the departing Brits--makes it possible to prepare a counter strategy, and an ad hoc alliance of the Hong Kong Triads (organized criminals) and Western interests immediately begins to subvert the new rule. The fatal troubles for the Maoists begin in nearby Canton and its surrounding province, where years of capitalist ventures have created an economic boom and a hearty distaste for heavy-handed rule by dour northerners. The shooting of a dissident student ignites the smoldering southern resentment, and civil war erupts. As cities and provinces fall to the new Republican army, long-standing fear and loathing of the communists motivate surrounding countries to begin their own attacks on the panicked Maoists. North Korea falls, and the Japanese begin to look on China as they did in the 1930's, an attitude that does at last lead to direct confrontation with the Americans. Something new to worry about. Absorbing and always, thanks to Winchester's intelligence and firsthand knowledge, quite believable. -- Copyright ©1992, Kirkus Associates, LP. All rights reserved.

This curious and unlovely work posits dreadful events that, in the author's view, will follow the transfer of Hong Kong to China. This is not a novel in any conventional sense but rather a speculative essay on the People's Republic of China emphasizing governmental cruelty and political repression, written by the author of the nonfiction Pacific Rising ( LJ 4/15/91) and The Sun Never Sets ( LJ 5/1/86). The subtitle is misleading. Korea, Japan, and ultimately the United States enter the picture at the very end, with savage results, but the author's real attention is on mainland China. The book's purpose is unclear. Despite some scholarly trappings, there is no effort to separate fact from speculation, making it impossible for a nonexpert to assess the author's credibility. Certainly, the total omission of the United Nations weakens his scenario; it is difficult to believe, after Desert Storm and the Environmental Summit, that the United States would singlehandedly take the military action Winchester imagines. Not recommended.
- Elsa Pendleton, Boeing Computer Support Svces., Ridgecrest, Cal.
Copyright 1992 Reed Business Information, Inc.

Buy Used
Condition: Very Good
SHIPS THE NEXT BUSINESS DAY NO... Learn more about this copy

Book Description Hardcover. Condition: Very Good. SHIPS THE NEXT BUSINESS DAY NO WRITING OR HIGHLIGHTING CLEAN PAGES THE COVER HAS LIGHT WEAR. EACH OF OUR BOOKS IS METICULOUSLY INSPECTED AND ACCURATELY DESCRIBED. IN ADDITION OUR LIKE NEW CONDITION BOOKS ARE ALWAYS VERY CLOSE TO NEW. Seller Inventory # HBM-66778-G5

Book Description Hardcover. Condition: Used; Good. Dispatched, from the UK, within 48 hours of ordering. This book is in good condition but will show signs of previous ownership. Please expect some creasing to the spine and/or minor damage to the cover. Seller Inventory # CHL1002079

Shipping: US$ 5.54
From United Kingdom to U.S.A.
Destination, rates & speeds

Book Description Hardback. Condition: Fair. A readable copy of the book which may include some defects such as highlighting and notes. Cover and pages may be creased and show discolouration. Seller Inventory # GOR009031617

5. Pacific Nightmare: A Third World War In The Far East

6. Pacific Nightmare: A Third World War in the Far East

Book Description 8vo hardcover 302pp index. very good / very good d/w. The year is 1999. As Hong Kong collapsed in the years leading up to 1997, Asia became dangerously unstable. Civil war breaks out in China between North and South, Shanghai against Szechuan. A new North Korean leader follows in his father's footsteps and invades the prosperous miracle country of South Korea. The Western allies, committed to defending South Korea, are reluctantly drawn into a conflict not of their own making. Watching patiently nearby is Japan, the giant that is not slow to see the imperial possibilities of this state of chaos. But if Japan strikes, the result will be a total and devastating "Pacific Nightmare". The way events in the Far East could develop towards a full-blown World war. Seller Inventory # 31778

8. PACIFIC NIGHTMARE: A THIRD WORLD WAR IN THE FAR EAST.

Shipping: US$ 20.11
From United Kingdom to U.S.A.
Destination, rates & speeds