Items related to Fools Rule: Inside the Failed Politics of Climate Change

Fools Rule: Inside the Failed Politics of Climate Change 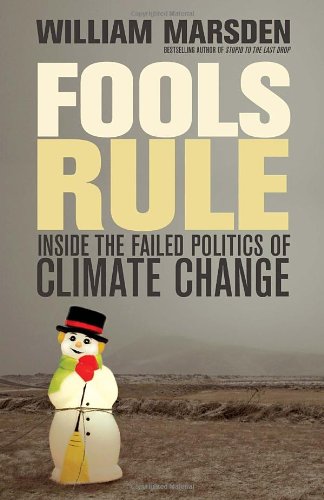 This eloquent, rage-inciting polemic about the global failure to deal with climate change will appeal to readers of Tim Flannery, George Monbiot and Bill McKibben - and anyone concerned with the economic and environmental future of our planet.

Kyoto, 1997. Montreal, 2005. Copenhagen, 2009. Cancun, 2010. In Fools Rule, Marsden illustrates how inefficient and short-sighted political negotiations have become despite mounting scientific evidence that immediate action is essential to curb the effects of climate change. International climate change summits are now widely monitored events, attended by state leaders and crowded with journalists; yet somehow they have never been less productive. Treaties and action plans are smothered by economic self-interest, diplomatic errors and every nation's hungry scramble for its share of the remaining atmospheric space. Marsden takes us from inside the bungled negotiations at Copenhagen to the melting glaciers and untapped oil reserves of the Arctic; he shows us the paralyzing effect oil and gas companies have on green legal initiatives in the United States, and therefore on any international climate change treaty; and, with wit and penetrating insight, he asks the toughest question - will we be able to change before it's too late?

WILLIAM MARSDEN is author of Stupid to the Last Drop and co-author of the national bestsellers Angels of Death and The Road to Hell. He is a senior investigative reporter for the Gazette in Montréal.

Arne Bang Mikkelsen was a happy man. And why not? The convention had gone as planned. His logistics were flawless.

During the two weeks from December 4 to 18, 2009, when world leaders met in Copenhagen and spectacularly failed to produce a global agreement on climate change, Arne found success in feeding and watering them. The enormous food production system that mankind had been perfecting over the last eight thousand years—in the process conquering nature and altering normal climatic cycles—had worked. As chief executive of the huge hangar-like Bella Conference Center where the United Nations Framework Convention on Climate Change (UNFCCC) conference was held, he was “really proud,” he said, that during the thirteen-day event the appetites of 45,000 people had been well served, the multitude having consumed three hundred tons of food including fish, poultry, beef, vegetables, fresh fruit and Danish hot dogs (pølse); 14,779 cakes (mostly apple strudel and chocolate squares); 350,000 glasses of water and 250,000 cups of coffee, plus thousands of bottles of beer and wine.

The only glitch was the long lineups into the convention itself, caused by a congested security system that forced some delegates to wait up to five hours in the cold of a Danish December before gaining entry. “The UN has apologized for this and has taken on the full responsibility,” Arne said. Nothing was gonna stick to Arne. From the Danish organizers’ point of view, the long queues were the only practical thing that did not function. “It has created respect throughout the world,” they said after the conference wrapped up and the world leaders and delegates had, as Greenpeace put it, fled the crime scene.

Arne’s finest hour, however, was not to be found in the simple fact of having fed so many delegates. As he stated in his final communiqué after the conference, it was the “record-time” assembly and furnishing of thirty-eight private meeting rooms, which the Americans and Chinese had ordered up with only three days left in the negotiations, that really showed his troops at their best.

Deep within the cavernous halls of Arne’s Bella Center, where 192 nations struggled to quite possibly remake the world, it was in the seclusion of these rooms that a select group of world leaders leapfrogged the whole process and created what they called the Copenhagen Accord. Then they quickly saddled up their private jets and headed home to nations where the poor are clamoring for their fair share of the world’s wealth or, in the case of President Obama, into a violent Washington snowstorm where the clamoring comes from a moneyed elite of “legal persons” with names like Goldman Sachs, Exxon, Chevron and Koch—the pillars of America’s corporate democracy.

These private meeting rooms were where the Western powers attempted crudely and very publicly to bribe a defiant developing world into submission; where they tried but failed to sideline China and in the process reinforced the Communist country’s overwhelming influence in the Third World; and where, as many scientists would conclude, the world’s climate systems inched much closer to collapse.

Soon after they had gone, Arne’s army swept away the evidence of failure in order to host another event in the annual rotation of fashion, holiday and car fairs. Within a week, the crime scene had been cleansed, erased. “Back to normal,” Arne said. As if nothing had ever happened.

I followed the climate talks from 2009 to 2011, including the meetings in Bonn, Bangkok and Barcelona that led up to the Christmas pantomime in Copenhagen and then, one year later, the sun-splashed conference in the paradise of Cancún.

Initially, I was a parachutist landing amid a conversation carried on in an unfamiliar coded English. Words such as “Lu-Lu-CFs” (meaning Land Use, Land Use Change and Forestry), “Napas” (National Adaptation Programs of Action), “Redd” (Reducing Emissions from Deforestation in Developing Countries) or, my favorite, “BINGOs” (Business and Industry Non-government Organizations) were bandied about with the easy fluency of the insider. So arcane were these negotiations that I had to go to school in the language. Indeed, the United Nations supplied such a training for neophytes like me.

What was important, of course, was not so much the army of acronyms but the history behind them, something most delegates had long since forgotten. What had brought them to these meetings in the first place?

The answer was science. Relegated to trade show status, it had become a commodity you could take or leave depending on your needs. My journey through the science of climate change— particularly my trek over the Arctic glaciers to study their primal warnings—revealed the utter desperation of scientists as they pile proof upon proof only to see it disappear into the smoke of denial or crash against the excuse of political and economic expediency. Science presents us with an assessment of risk. It tells us that climate change is the “defining challenge of our times,” as UNFCCC executive secretary Christiana Figueres put it in the months leading up to the 2010 meeting in Cancún. “What is at stake here is none other than the long-term sustainable future of humanity . . . The milestone science has set . . . requires nothing less than an energy revolution both in production and in consumption.” To achieve this, she said, nations need to grasp “the politically possible at every step.”

Canada, which exhibits one of the more extreme cases of national cognitive dissonance, has turned back the clock on its greenhouse gas commitments, cranking up its tar sands production and even expanding coal-fired power plants. But the country is not unique. Australia, China, India and Brazil are all eagerly expanding their carbon footprints. These negotiations involve thousands of conflicting economic, social and political interests across individual, local, national and international levels that have so far defied a solution as each country marches along according to its greed.

Perhaps this is because the rich industrialized West is actively in denial as to what the stakes are. We act as if these negotiations are about politics as usual—Figueres’s politics of the possible. Or, as Jonathan Pershing, the tall, self-assured American negotiator, told me: “The politics of the negotiations does not speak in any way to what has to be done.” The science is overwhelming and frightening. But the reality is that the pace of political progress is a question only of achieving “milestones.” Pershing is a scientist with a doctorate in geology and geophysics and an expertise in petroleum geology. He had previously worked as a climate change negotiator in the Clinton administration and also served as an author of the International Panel on Climate Change Fourth Assessment Report. So he should know better. Yet he sticks to the political mantra. While the politics is regrettable, he says, that is the way things are. The possible is always what’s at issue.

Nations may find meaning in the politically possible, but climate change does not. It is a rising sea, a tsunami, an earthquake, a hurricane, a flood, a drought that sweeps away society’s backup plans. It is a reminder that the way we live is not at all grounded in nature. The gap between what the science is asking us to do and what most people are willing to accept—what they claim is “possible”—gives you vertigo. “When you are at the table and you are negotiating a bit more tons or a bit less, it’s insignificant compared to what you would need to do if you believe all these scientists,” Canada’s former environment minister Stéphane Dion told me.

Yet whether governments such as Canada’s believe in the dangers of climate change hardly matters. What’s important to them is economic stability so they can maintain social equilibrium and get re-elected. Laying down a carpet of deceit to calm social fears over global warming becomes a moral imperative.  How can you say you believe in the science and at the same time campaign against what the science proves is necessary to reduce the risk of runaway climate change? I asked Michael Martin, Canada’s chief negotiator and ambassador for climate change, during an interview in Bonn in 2009.

“That’s what these negotiations are for,” he replied, adjusting his rimless glasses. “It’s all about what is possible.”

What about what is necessary?

“That’s up for negotiation too.”

If there is one inescapable issue in this entire affair, one question that encapsulates the whole sordid business of haggling over pollution, it is the matter of atmospheric space. How many more tons of greenhouse gases can we afford to put up there without causing catastrophic climate change, and which countries will get to emit them? Without a resolution of this issue, there may never be a deal.

The atmospheric space is the new frontier whose borders have gradually been defined over decades of scientific research. Like surveyors sent out to map new colonies and their potential to support human populations, scientists have charted the capacity of the atmosphere, the oceans and the forests—the earth’s main reservoirs of greenhouse gases—to maintain a stable climate. They have discovered natural boundaries that they define in parts per million of greenhouse gases, mostly carbon dioxide. The normal carbon dioxide level in the atmosphere is 280 ppm. Our present level: 387 ppm, which puts us in the danger zone. We reach 450 ppm and we burn.

1. Fools Rule: Inside the Failed Politics of Climate Change