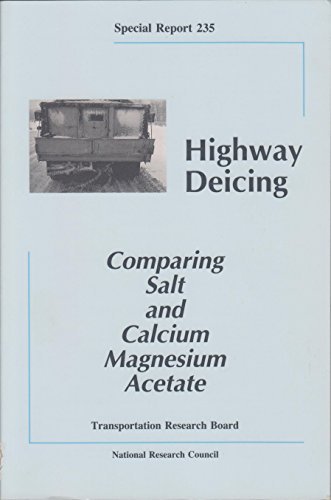 Much of the report focuses on defining the true cost of salt, which is the most popular deicer and the standard of comparison for most other deicing products. The report examines salt's effects on motor vehicles and infrastructure, the environment, and drinking water. National costs are estimated for some effects, though not all, because of insufficient information, especially for environmental and drinking water effects. The report also summarizes what is known about CMA, including its field performance, environmental effects, compatibility with automotive and highway materials, production technologies, and market price.

After reviewing the evidence, the committee that produced the report concluded that the widespread use of CMA as a general replacement for salt is unlikely and unwarranted. The committee did not rule out the use of CMA on a more selective basis--such as on corrosion-prone bridges and in environmentally sensitive areas--but the cost-effectiveness of such uses can only be determined on a case-by-case basis. The report concludes with a discussion of the important cost and use issues that must be addressed by highway agencies during consideration of CMA for deicing.

Book Description paperback. Condition: VERY GOOD. Photocopy. 170 pp. Small sticker on front. Unmarked otherwise. **We provide professional service and individual attention to your order, daily shipments, and sturdy packaging. FREE TRACKING ON ALL SHIPMENTS WITHIN USA. **We are a small family business with over 30 years experience i. Seller Inventory # 43937