Items related to Minions of the Moon

Bowes, Richard Minions of the Moon

Minions of the Moon 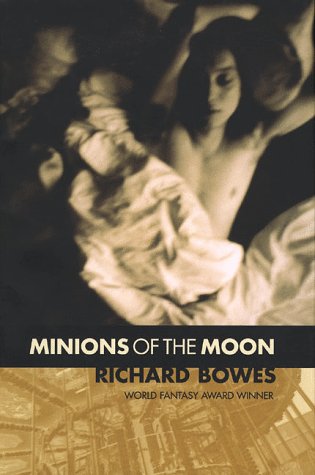 Kevin Grierson has a Shadow with a mind of its own. It likes thrills, it likes power, it likes the rush of drugs and danger. From the suburbs of Boston to the streets of New York, from the false glamour of advertising to the dark glamour of hustling and drug-dealing. Grierson's Shadow keeps him walking the edge of destruction and madness. Then a simple robbery goes horribly wrong. With the help of a flawed saint named Leo Dunn, Grierson struggles to banish his Shadow, and succeeds. Temporarily. Years later, sober and settled, at peace with his world, Kevin Grierson meets his Shadow again. And this time it won't go away.

When customers seek their memories in Half Remembered Things, Kevin Grierson's New York shop, they gawk at the price tags attached to the toys of their childhood. Kevin reflects, "The past is always just a bit more expensive than we thought possible."

And so it is for Kevin, a successful middle-aged antiques dealer whose past is exacting a price: he journeys down dark memories of peddling his young body to strangers, destroying himself with booze and speed, striving to become predator rather than prey on the streets of New York in the 1960s. The problem, as he sees it, is that his Shadow--more than an alternate self but less than an independent doppelgänger--is the bad guy, the one who would bring back the old habits. But his Shadow is not purely evil, and Kevin is not purely good. The two of them have much to learn if they ever hope to be reconciled.

Minions of the Moon is an absorbing, beautifully wrought novel of dark fantasy--its complex web of stories told in interweaving strands, its dreamlike images balanced by a clean, matter-of-fact prose style. --Fiona Webster

"This is powerful fiction....For the elegance of the prose, the depth of the characterization, the sheer bravado and poignant grace of the story itself, Bowes stands...in a class of his own." --Charles de Lint

"Richard Bowes is one of the finest contemporary American fiction writers, in or out of the SF genre." --William Sanders

"A terrific piece of storytelling, which reminded me...both of Stephen King and of Jonathan Carroll, spooky, strange, and unsettling." --Neil Gaiman

"Gripping, hard-hitting, magical, and utterly unique, Minions of the Moon is one of the very best books I have read in years." --Terry Windling

1. Minions of the Moon

2. Minions of the Moon

3. Minions of the Moon Bowes, Richard

4. Minions of the Moon Bowes, Richard