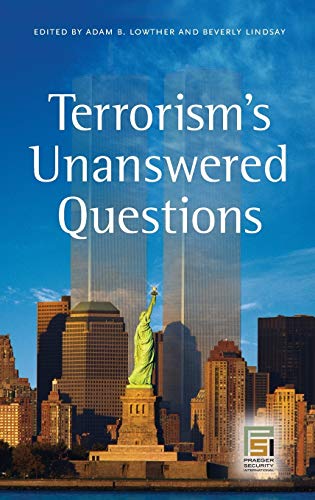 Despite the growth of interest in the study of terrorism since 9/11, terrorism analysts rarely take a multidisciplinary approach to the subject. This leaves a number of terrorism's characteristics to be explored in new and unique ways. Terrorism's Unanswered Questions brings together scholars from the fields of criminology, international relations, law, political science, security studies, and sociology to answer several important questions where consensus has yet to be reached. Each chapter offers a new approach to the question asked that is both unique and challenges popular thought. The result is an original work appealing to a broad audience of scholars and students who desire to develop a better understanding of terrorism's characteristics.

In the wake of the September 11, 2001, attacks on the United States terrorism became a topic for the masses to explore, rather than the hidden purview of analysts and scholars tucked away at the CIA or in the ivory tower. Now, more than five years later, there remains much to be discovered about terrorism and its causes. This volume takes a look at some of terrorism's unanswered questions. How do we define terrorism? What threat does the United States face from weapons of mass destruction? Why has international law failed to stop terrorism? These are but three of the questions addressed in this volume. While the editors do not claim to have all of the answers, they do promise a view of terrorism not seen before.

This work plunges directly into the grey area of terrorism scholarship, tackling difficult questions where there is little agreement in an effort to shed light on key characteristics of terrorism that are often left untouched.

Adam B. Lowther is Research Professor at the Air Force Research Institute. He is the author of Americans and Asymmetric Conflict: Lebanon, Somalia and Afghanistan and scholarly articles in various publications. Dr. Lowther specializes in the American approach to unconventional warfare and naval strategy.

Beverly Lindsay, a Distinguished Multiple Fulbright Fellow, is Professor and Senior Scientist of Higher Education and International Policy Studies at The Pennsylvania State University. Previously, she was Dean of International Education and Policy Studies and Professor at Hampton University and Dean of International Programs at Penn State. She is a member of the Council on Foreign Relations. Her latest of five books is Ralph Johnson Bunche: Public Intellectual and Nobel Peace Laureate.