Items related to A Fool's Alphabet 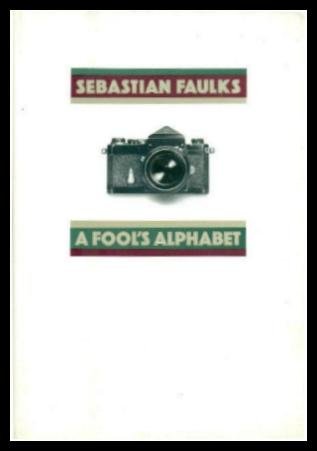 Pietro Russell's nomadic life unfolds alphabetically, not chronologically, with each segment from A to Z corresponding to the first letter of a place, such as L for Lyndonville, the town in which he fell in love

Sebastian Faulks is best known for his trilogy of novels set in France: The Girl at the Lion d’Or, Birdsong, and Charlotte Gray, the latter two of which were bestsellers. After a period in France, he and his family now live in London.
From the Trade Paperback edition.

Vesuvius was erupting. The trembling of the ground which was common in the Campania district was intensified so that cars would not remain still, even on level ground, but began to shudder and bolt like frightened horses. The sea in the Bay of Naples was being sucked back from the beach and swallowed by the ocean, leaving beechwood and stranded creatures on the suddenly revealed sand. Inland from the volcano a huge black cloud hung steadily until it was ripped by thick and wavering lengths of flame, which were like forks of magnified lightning. After a time the cloud began to sink down and cover the sea, obscuring the promontory and removing the island of Capri from sight.

In the streets of Sorrento, on the other side of the bay, the people ran to their houses. There was the sound of car engines being revved and rubber tyres being squeezed against the roads by sudden acceleration. Shutters were brought together with a wooden thud before the iron arms descended to bolt them. The dense black cloud that hung across the bay seemed also to have loomed behind them, covering and flooding the hills. The flames remained distant, but ashes began to fall in the streets in dense showers.

Safe behind the glass doors of the balcony on the first floor of the convalescent hotel, Corporal Raymond Russell tapped a cigarette against the side of the packet, revolved it slowly between his fingers and poked it into the corner of his mouth.

'On your way tomorrow, then,' the medical officer had told him that morning. 'Got your orders?'

'Yes back to A Company,' said Russell.

The doctor briefly examined the healed shell wound in his left shoulder. 'Shouldn't give you any more trouble,' he said. He looked out of the window. 'It should be nice to spend the summer in Rome.'

He had passed the day listening to the rumbling from across the bay, smoking cigarettes and thinking what still awaited him in Anzio. Vesuvius had taken his mind off it for a time, though the noise and violence of the eruption also reminded him of the forward positions in the beachhead.

He slept well, despite the volcano. In the morning he rose at seven, packed his kitbag and made his way downstairs in the old hotel that the Red Cross had taken over. There was a smell of coffee and the sound of Italian women talking and laughing in the kitchens. He felt caught in a trap of time, neither soldier nor civilian. He liked the sounds of the women's voices and the everyday life they represented. He wanted this quite ordinary world of airy rooms, new bread, curtains, children. He forced the thought from his mind as he pushed open the swing doors of the hotel. His loyalty was with Sugden, Bell, Padgett, the Major and the other men in the icy slit trenches. He reconciled himself to the thought of further weeks of their undrinkable distilled alcohol, their sexual frustration and the slow hours of boredom punctuated by minutes of extreme terror.

The sun was out on the streets of Sorrento. As he began to walk downhill he passed a magnificent sign in which the iron was wrought like arthritic fingers to read 'Pasticceria' and hammered into a pink wall on the corner of a street. Under his feet the pavements were ankle-deep in grey dust from the volcano.

Four weeks earlier he had been jammed in between Bell and Padgett in the small landing craft that cast off from the mother ship in the Bay of Anzio. Bell's face was close to his, and he was breathing fast.

'Galipoli,' he said, his eyes showing white through his blackened face. 'That's what our general thinks. Another bloody rat-trap. What do we want a Yank general for anyway?'

Russell felt the beveled edge of the craft's iron rail beneath his hand. Next to him Padgett was praying with a rapid mumbling sound. It was a beautiful winter night, star-pocked, calm and mild. There had been cases of seasickness when they headed south towards Africa in some cumbersome diversionary move, but since the ship had swung round towards their true destination, carving a mile-wide circle of foam through the Tyrrhenian sea, the wind had died and the groaning had ceased.