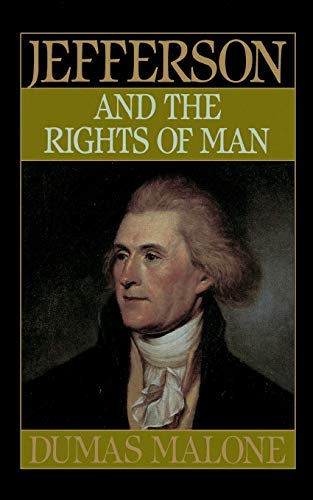 The second volume in this Pulitzer Prize-winning biography tells the story of the eventful middle years in the life of Thomas Jefferson: his ministry to France in the years just before the French Revolution and during the early stages of that conflict; his service as secretary of state in President George Washington's first cabinet; the crucial period of his first differences with Alexander Hamilton and the beginnings of his long struggle with the Federalists. .

Dumas Malone (1892-1986) taught history at American universities such as Yale and Columbia and served for seven years as director of the Harvard University Press before becoming the biographer-in-residence at the University of Virginia. His work as historian and biographer has earned him several honors, including the Pulitzer Prize, the Thomas Jefferson Award, the John F. Kennedy Medal, and the Presidential Medal of Freedom.

Jefferson and the Rights of Man is better, even, than its predecessor, and that is saying a great deal. What I like particularly is that Malone... has by some great miracle, achieved something of Jefferson’s own combination of profundity and erudition and gracefulness.

1. Jefferson and the Rights of Man (Paperback or Softback)

5. Jefferson & the Rights of Man