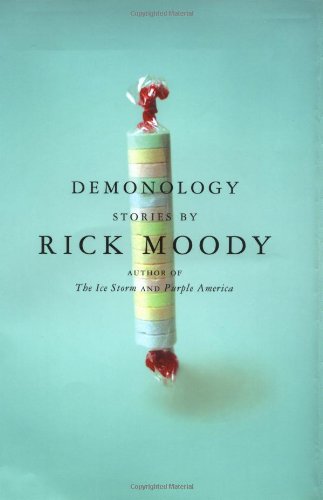 Offers a collection of stories about youth and middle age, the Midwest and the West Coast, and other topics.

Rick Moody is a traditionalist. Despite his page-long paragraphs, brand-name dropping, obsessive cataloguing of workplace ritual, seemingly random italicizing, and inevitable digs at "multinational entertainment providers," Moody makes classically beautiful short stories. His tools are those of any master storyteller: detail, catharsis, the right word at the right moment. Granted, the details can be unexpected: e.g., comparative values of different Pez dispensers. And his brand of catharsis can be mighty abrupt. "Now the intolerable part of this story begins," he warns us in the title story of Demonology, while "Hawaiian Night" includes the ominous spoiler, "Here comes tragedy." Yet his word choice is always immaculate.

Moody's collection is framed by two stories in which the narrator ruminates over his dead sister. In the first, "The Mansion on the Hill," he speaks directly to the departed:

You were a fine sister, but you changed your mind all the time, and I had no idea if these things I'd attributed to you in the last year were features of the you I once knew, or whether, in death, you had become the property of your mourners, so that we made of you a puppet.

The story promptly turns into a revenge fantasy, with an absurd climax wherein the narrator attacks his sister's former fiancé. "Demonology" deals with the actual circumstances of her death. First we see her tucking the kids into bed prior to her fatal seizure: "And my sister kissed her daughter multiply, because my niece is a little impish redhead, and it's hard not to kiss her." Moody then switches tone smoothly and beautifully as the medics work on the dead woman: "Her body jumped while they shocked her--she was a revenant in some corridor of simultaneities--but her heart wouldn't start." A writer who pins down such fluidities can get up to all the experimentation he likes. We'll go along willingly. --Claire Dederer About the Author:

Rick Moody (born Hiram Frederick Moody, III on October 18, 1961, New York City), is an American novelist and short story writer best known for The Ice Storm (1994), a chronicle of the dissolution of two suburban Connecticut families over Thanksgiving weekend in 1973. His first novel Garden State (1992) won the Pushcart Editor's Choice Award. His memoir The Black Veil (2002) won the PEN/Martha Albrand Award for the Art of the Memoir. He has also received the Addison Metcalf Award, the Paris Review Aga Khan Prize, and a Guggenheim Fellowship. His work has appeared in The New Yorker, Esquire, the Paris Review, Harper's, Details, the New York Times, and Grand Street. He grew up in several of the Connecticut suburbs where he later set stories and novels, including Darien and New Canaan. He graduated from St. Paul's School in New Hampshire, Brown University, received a master's degree in fine art from Columbia University and has taught at the State University of New York at Purchase and Bennington College. According to The Writer's Almanac, Moody dropped out of graduate school at Columbia after a year because he spent most of his time drinking and had a hard time paying his rent or holding a job. Moody stated, "I was a clerk at [a bookstore] and I got fired after one month. They said, 'We really like you and we respect you as a writer, but this cash register thing is just not working out.'" Moody finally checked himself into a mental hospital, got sober, and then he wrote his first novel, Garden State, about young people growing up in the industrial wasteland of New Jersey. He lives in Brooklyn and Fishers Island.