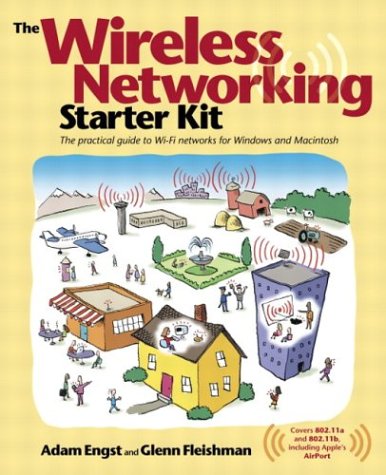 Once authors Adam C. Engst and Glenn Fleishman discovered that the freedom of a wireless network meant they could access the Internet from bed, the living room, the coffee house down the street, most major airports, and even some city parks, there was no going back to the days of clumsy wired networks. Now they¿re here to share their knowledge in the new book The Wireless Networking Starter Kit Whether you¿re a Mac or PC user, if you¿re ready to embrace the freedom of wireless, this is the place to start. In these pages you¿ll learn first about the underpinnings of wireless technology and network basics before getting down to the real business at hand: setting up, configuring, and maintaining a wireless network. Step-by-step instructions delivered in easily digestible chunks make it easy to get your own network humming. Along the way you¿ll learn about security, sharing Internet connections among multiple computers, bridging two Ethernet networks, and more. And if you do run into trouble, there¿s a handy troubleshooting guide to answer your questions. If you have a couple of computers and the desire to connect them, you¿ll find everything you need to do so here.

Adam Engst is the publisher of TidBITS, one of the oldest and most-respected Internet-based newsletters, distributed weekly to many thousands of readers. He has written numerous technical books, including the best-selling Internet Starter Kit series, and many magazine articles—thanks to contributing editor positions at MacUser, MacWEEK, and now Macworld. Glenn Fleishman is a freelance journalist based in Seattle who contributes to The New York Times, Seattle Weekly, and Macworld, InfoWorld, Fortune, and Wired magazines.