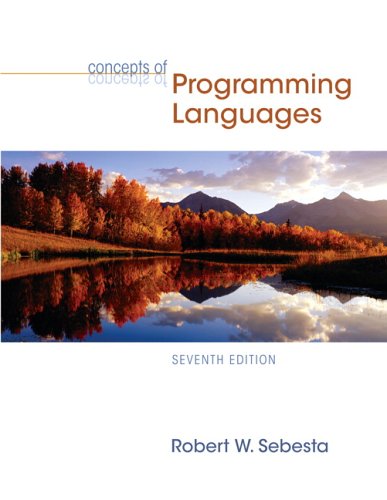 The fifth edition of Concepts of Programming Languages by Robert Sebesta continues the approach that has made it the undisputed market leader. It describes fundamental concepts of programming languages by presenting design issues of the various language constructs, examining the design choices for these constructs in a few common languages, and critically comparing the design alternatives. This book allows those with the ability to program to learn how to choose appropriate languages for certain tasks, increase their abilities to learn new languages, and understand the significance of implementation. It illustrates various language constructs and design alternatives through Java, JavaScript, C++, C, Ada, and Fortran, and intertwines discussions of object-oriented programming material with the discussions of the non-OO imperative languages. It also provides extensive material on semantics. This new edition is updated to include a new chapter covering parsing, new material on JavaScript, and updated material on Java 1.3. This book is suitable for programmers who want to get into the theory behind programming-language development and utilization.

Robert Sebesta is an Associate Professor in the Computer Science Department at the University of Colorado, Colorado Springs. Professor Sebesta received a BS in applied mathematics from the University of Colorado, Boulder, and MS and PhD degrees in computer science from the Pennsylvania State University. His professional interests are the design and evaluation of programming languages, compiler design, and software testing methods and tools. He is the author of Addison-Wesley’s Concepts of Programming Languages and Programming the World Wide Web.