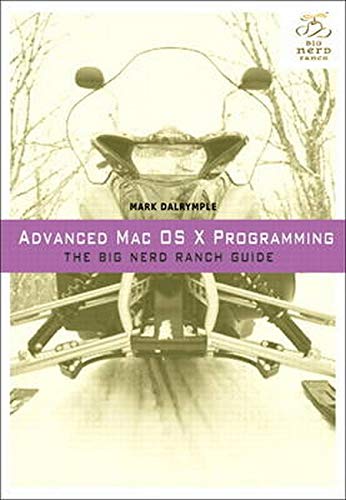 While there are several books on programming for Mac OS X, Advanced Mac OS X Programming: The Big Nerd Ranch Guide is the only one that contains explanations of how to leverage the powerful underlying technologies. This book gets down to the real nitty-gritty. The third edition is updated for Mac OS X 10.5 and 10.6 and covers new technologies like DTrace, Instruments, Grand Central Dispatch, blocks, and NSOperation.

Mark has experience on the client side and server side, being a veteran of several startups and larger technology operations like AOL and Google. On the back-end, he has been the technical lead for AOLserver, a high-performance web server handling tens of thousands of hits per second on many different Unix platforms (Linux, HP, SGI, Digital Alpha, Solaris). On the client-side, he has worked with native Mac toolkits, helped in the construction of cross-platform toolkits, and currently has code running on millions of Macintosh desktops world-wide.

Mark is principal author of Learn Objective-C on the Macintosh and has been the technical reviewer for many Cocoa and iPhone titles with Apress. He is also the co-founder of CocoaHeads, the international Mac programmer's group, with chapters in 26 countries on five continents.

“Mark and Aaron's Core Mac OS X and Unix Programming quickly became my favorite development book. It was the first book to cover the advanced topics not discussed elsewhere. I excitedly read it from cover to cover, eagerly eating up the information on topics I had never examined before. Advanced Mac OS X Programming is an incredible sequel, covering the new Mac OS X technologies that have emerged since. This book goes into a level of detail not offered by other documentation, but also includes easy to follow examples. After reading it, you'll impress your peers with your clear understanding of advanced Mac OS X programming.”

“Advanced Mac OS X Programming has long been a required text and source of curriculum for my 10-week Mac and iOS programming course. This new edition brings anticipated updates covering the latest Apple developer technologies. The fresh content keeps this classic book relevant and critical to programmers of all levels working on Apple's platforms. There is simply no other collection of published material that covers these advanced topics with equal depth and skill.”

"Many books will introduce you to the basics of Mac OS X programming. Advanced Mac OS X Programming: The Big Nerd Ranch Guide aims for much more, laying out a course for becoming a seasoned expert in many of the nitty-gritty details of developing for the platform."