Items related to Operative Surgery of the Colon, Rectum and Anus

Operative Surgery of the Colon, Rectum and Anus 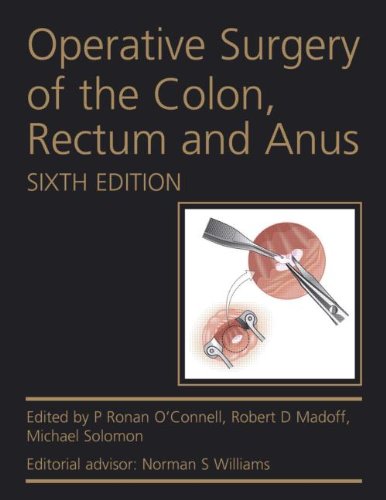 The sixth edition of Operative Surgery of the Colon, Rectum and Anus presents the state of the art in colorectal surgery. Edited by world renowned surgeons and with expert chapters from contributors in North America, Europe, and Australasia, the book is essential reading for the experienced surgeon established in colorectal practice as well as advanced trainees in general surgery. Each procedure is described in authoritative text beautifully complemented by high quality step-by-step color artwork and intraoperative photographs, enabling the reader to approach common and rare colorectal conditions with confidence.

The book comprehensively covers surgery of the anus, rectum and colon in 87 chapters, grouped into nine sections for ease of reference (General Principles, Proctology, Stomas, Small Intestine, Colon, Rectum, Perineal Reconstruction, Rectal Prolapse and Surgery for Incontinence). The print edition is further enhanced by an accompanying VitalSource eBook, enabling the user to download and read the book offline on a personal computer or mobile device.

A masterful account of contemporary surgical practice, Operative Surgery of the Colon, Rectum and Anus will remain the definitive atlas of coloproctology for years to come.

P. Ronan O'Connell is Professor of Surgery and Consultant Surgeon at St Vincent's University Hospital since September 2007. He was previously Senior Lecturer in Surgery at the Royal London Hospital (1989-1990), consultant surgeon at the Mater Misericordiae University Hospital (1990-2007) and Newman Clinical Research Professor at UCD (2002- 2007). In 2009 he was appointed head of the Section of Surgery and Surgical Sciences at University College Dublin. Between 2011 and 2013 he was Chairman of the South East Dublin Department of Surgery.

Prof O'Connell has published widely in the areas of inflammatory bowel disease, pelvic floor physiology and continence. His research has been recognised by numerous awards including the Patey Prize of the Surgical Research Society (1985), the British Journal of Surgery Prize at the Association of Coloproctology Great Britain and Ireland (1995, 1997, 1999 and 2007), the American Society of Colon and Rectal Surgeons Research Prize (2007 and 2010) and the Physiological Society (2009). His research is currently funded by Science Foundation Ireland, the Bowel Disease Research Foundation of ACPGBI, Medtronic Comporation and the EU COST collaboration.

Michael J. Solomon, MSc, FRACS, FRCSI, is a consultant surgeon and Academic Head of the Department of Colorectal Surgery at the Royal Prince Alfred Hospital in Sydney. He is a Clinical Professor of Surgery and Director of Colorectal Research, both for Royal Prince Alfred Hospital and the University of Sydney and is a past the President of the Colorectal Surgical Society of Australia & New Zealand (CSSANZ). He was previously the Chairman of the Post-FRACS Training Board in Colorectal Surgery of RACS & CSSANZ of which he remained a member for 16 years. He has been recently on the editorial board of DCR, Colorectal Disease & Int J Colorectal Diseases and is currently a Board Member of the NSW State Cancer Institute. He has received an honorary fellowship from the Royal College of Surgeons of Ireland as well as an honorary membership of the Association of Coloproctology of Great Britain & Ireland. He recently was awarded the prestigious RPA Foundation Research Medal in 2014 being the first surgeon to be given this honour.

Advisory Editor:
Sir Norman S. Williams, MS, FRCS, FMedSci, FRCP, FRCP(Edin), FRCA, FDS(Hon), FACS(Hon), FRCSI(Hon), is Professor of Surgery at Barts and The London, Queen Mary’s School of Medicine and Dentistry and Director of the National Centre for Bowel Research and Surgical Innovation. He trained in London, Bristol, Leeds and Los Angeles. His main clinical interests are sphincter preservation and reconstructive colorectal surgery, and his scientific interests are GI motility and anorectal physiology. He was a founding trustee and Chairman of Bowel & Cancer Research and is currently the charity’s President.

"...the editors have succeeded in their stated aim to produce a definitive contemporary textbook of operative colorectal surgery. I think a copy should be available in any hospital library where colorectal surgery is performed..."
―Colorectal Disease

4. Operative Surgery of the Colon, Rectum and Anus

5. Operative Surgery of the Colon, Rectum and Anus

Shipping: US$ 9.17
From United Kingdom to U.S.A.
Destination, rates & speeds

6. Operative Surgery of the Colon, Rectum and Anus

7. Operative Surgery of the Colon, Rectum and Anus