Items related to The Two Towers 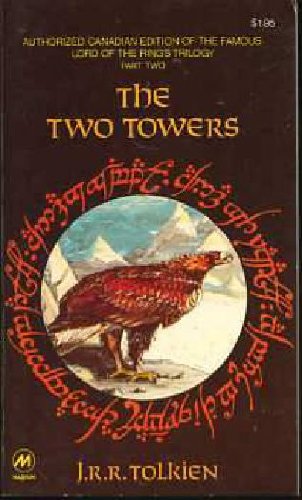 Fine Fine Fine Fine Fine Fine Paperback Fine Overview Sauron, the Dark Lord, has gathered to him all the Rings of Power except one--the One Ring that rules them all--which has fallen into the hands of the hobbit Bilbo Baggins. Young Frodo Baggins finds himself faced with an immense task when Bilbo entrusts the Ring to his care. Frodo must make a perilous journey across Middle-earth to the Cracks of Doom, there to destroy the Ring and foil the Dark Lord in his evil purpose. Saga of a group heroes who

THE GREATEST FANTASY EPIC OF OUR TIME
The Fellowship was scattered. Some were bracing hopelessly for war against the ancient evil of Sauron. Some were contending with the treachery of the wizard Saruman. Only Frodo and Sam were left to take the accursed Ring of Power to be destroyed in Mordor-the dark Kingdom where Sauron was supreme. Their guide was Gollum, deceitful and lust-filled, slave to the corruption of the Ring.
Thus continues the magnificent, bestselling tale of adventure begun in "The Fellowship of the Ring, which reaches its soul-stirring climax in "The Return of the King.

In the First Part of The Lord of the Rings, 111-year-old Bilbo Baggins (hero of The Hobbit) passed along his magical ring to his orphaned nephew, Frodo--unwittingly setting its original owner, the horrible Gollum, on his trail. Lest the ring fall into evil hands, Frodo sought to destroy it at the Mountain of Fire in the enemy land of Mordor. He convened the Companions of the Ring to carry out this perilous mission, but his brave band has been scattered, beset by orc-soldiers, and in the Second Part, as 'the great Darkness' descends, Frodo himself has mysteriously disappeared.