Items related to The Probability Broach 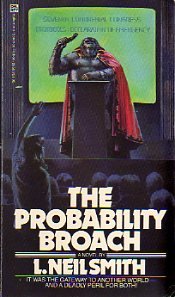 Denver detective Win Bear, on the trail of a murderer, discovers much more than a killer. He accidentally stumbles upon the probability broach, a portal to a myriad of worlds--some wildly different from, others disconcertingly similar to our own. Win finds himself transported to an alternate Earth where Congress is in Colorado, everyone carries a gun, there are gorillas in the Senate, and public services are controlled by private businesses.

L. Neil Smith is the two time winner of the Prometheus Award for Best Libertarian Fiction for his novels Pallas (1993) and The Probability Broach (1980). As founder and National Coordinator of the Libertarian Second Amendment Caucus, publisher of the on-line magazine The Libertarian Enterprise, and a Life member of the National Rifle Association, Smith is renowned for his prominence in the Libertarian movement, of which he has been a part of for more than thirty-five years. Author of more than twenty books, Smith has been hailed for his ability to combine adventure, humor, and rivetingly original political concepts to create more compellingly than any other writer, novels that embody Libertarian concepts. He currently resides in Fort Collins, Colorado, with his wife and daughter.