Items related to The Talismans of Shannara (The Heritage of Shannara... 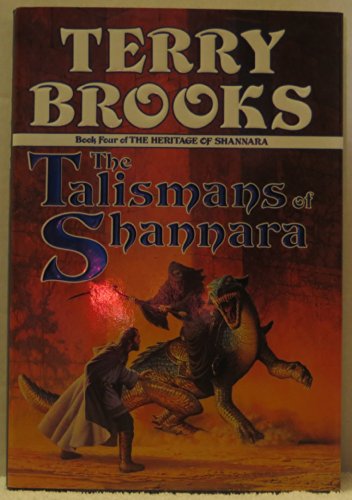 Although some of the goals to keep Shannara safe had been met, the work of Walker Boh, Wren, and Par was not yet done. For The Shadowmen still swarmed over the Four Lands, poisoning all with their dark magic. Each Shannaran had a special death waiting for him- at the hands of The Shadowmen-unless Par could find a way to free them all with the Sword of Shannara.
From the Paperback edition.

"If Harry Potter has given you a thirst for fantasy and you have not discovered the magic of Terry Brooks, you are in for a treat."
--Rocky Mountain News

"If you were delighted and entranced by Michael Ende's The Never Ending Story, you will definitely want to sample one of more of Terry Brooks's books."
--Santa Cruz Sentinel

A writer since high school, Terry Brooks published his first novel, The Sword of Shannara, in 1977. It was a New York Times bestseller for more than five months. He has published seventeen consecutive bestsellers since, including The Voyage of the Jerle Shannara: Ilse Witch and the novel based upon the screenplay and story by George Lucas: Star Wars®: Episode I The Phantom Menace™. His novels Running with the Demon and A Knight of the Word were each selected by the Rocky Mountain News as one of the best science fiction/ fantasy novels of the twentieth century.

The author was a practicing attorney for many years but now writes full-time. He lives with his wife, Judine, in the Pacific Northwest and Hawaii.

Visit us online at www.shannara.com.
From the Paperback edition.

8. The Talismans of Shannara