Items related to A Calculus of Angels (The Age of Unreason, Book 2)

J. Gregory Keyes A Calculus of Angels (The Age of Unreason, Book 2)

A Calculus of Angels (The Age of Unreason, Book 2) 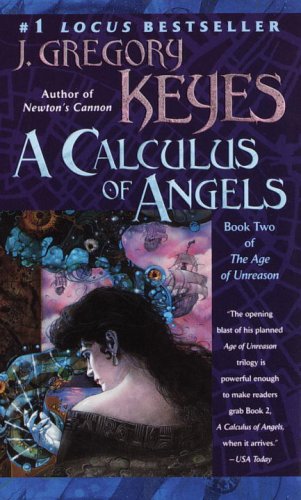 1722: A second Dark Age looms. An asteroid has devastated the Earth, called down by dire creatures who plot against the world of men. The brilliant-- some say mad--Isaac Newton has taken refuge in ancient Prague. There, with his young apprentice Ben Franklin, he plumbs the secrets of the aetheric beings who have so nearly destroyed humanity.

But their safety is tenuous. Peter the Great marches his unstoppable forces across Europe. And half a world away, Cotton Mather and Blackbeard the pirate assemble a party of colonial luminaries to cross the Atlantic and discover what has befallen the Old World. With them sails Red Shoes, a Choctaw shaman whose mysterious connections to the invisible world warn him that they are all moving toward a confrontation as violent as it is decisive . . .

What if Isaac Newton had discovered that alchemy works? J. Gregory Keyes has based his Age of Unreason series on an alternate 18th century shaped by a "science" that grew from Newton's discovery of "philosopher's mercury," which "can transmit vibrations into the aether" and thus "alter the states and composition of matter." In A Calculus of Angels, Keyes continues the tale he began in Newton's Cannon. It's a satisfying sequel that nevertheless leaves the reader impatient for the next book.

Two years have passed since the asteroid struck. The weather is unnaturally cold, the skies perpetually overcast. England is devastated, the French government has collapsed upon the death of Louis XIV. Peter the Great, now inspired by the guardian spirit who preserved Louis, has marched his armies westward into the Netherlands and France. In the New World, the abandoned colonists send a delegation including Blackbeard, Cotton Mather, and a Choctaw shaman named Red Shoes to find out what's happened. In Prague, Newton and his apprentice, Ben Franklin, seek to protect the city from aetheric attack. The mathematically gifted Adrienne de Montchevreuil is also back and expanding her knowledge of the mysterious malakim who inhabit the aether and menace mankind.

Keyes creates a very believable mixture of history, fantasy, and plausibly imagined historical characters. Each book has been exciting, suspenseful, and beautifully written. No admirer of alternate history should miss this series. --Nona Vero

"The opening blast of his planned Age of Unreason trilogy is powerful enough to make readers grab Book 2, A Calculus of Angels, when it arrives."
--USA Today

4. A CALCULUS OF ANGELS (THE AGE OF