Items related to A Gift Of Hope

A Gift Of Hope 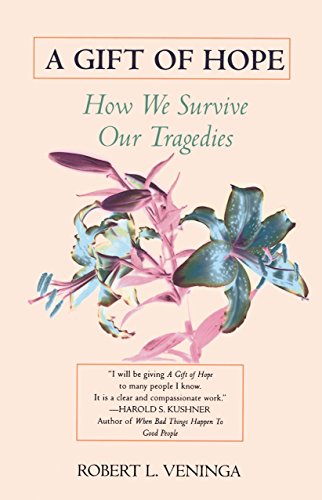 Tragedy is a part of life, it is a part of the human mystery which we all must face. A Gift of Hope is a moving, beautifully written book that will give you the understanding and the self-assurance to overcome the anger and the loneliness, the suffering and the pain of your own personal travail: the loss of a loved one, the heartbreak of a handicapped child, a debilitating illness, an unwanted divorce, a severe financial setback. Here is a practical and inspirational guide to help you express your sorrow and begin the process of healing -- to help you move from sadness to serenity, from fear to faith, and to find courage in your moment of crisis.
-- How to identify the stages of grief and recognize your need for help
-- How to soothe the initial panic and relieve the long-term anxiety
-- How to preserve your health, resist self-destructive impulses, and renew your sense of well-being
-- How to draw on family and friends for spiritual solace and emotional support
-- When to seek professional guidance, with a comprehensive list of national organizations

A moving, beautifully written book that will give you the understanding and the self-assurance to overcome the anger and the loneliness, the suffering and the pain of our own personal travail: the loss of a loved one, the heartbreak of a handicapped child, a debilitating illness, an unwanted divorce, a severe financial setback.

Straight from the Heart

In the midst of winter, I finally learned that there was in me an invincible summer.
— ALBERT CAMUS

My friendship with Jim Spradley was relatively brief. But in the span of five years we became like trusted brothers. We would meet for breakfast and talk about work and new projects. We would share dreams and sometimes disappointments. Frequently we would plan weekend vacations for our families. We kept few secrets from one another. I would trust him with my life. And he would trust me with his.

But he died after a fifteen-month illness.

The day after the funeral I met my students at the University of Minnesota. I started to lecture but suddenly felt overwhelmed with emotion. All the events of the past twenty-four hours flooded my mind. I couldn’t continue. I told the students what had happened.

To my surprise at least half of them stayed after class to talk. Reassurances were given. Even a few hugs. Heartaches, I have learned, bring people together.

I sat down weary, exhausted by all that had happened.

But then I noticed a graduate student waiting for me in the back of the classroom. When our eyes met, he said, “It will take time, but you will recover.”

I was a bit offended by the quick reassurance and the tone of certainty. After all, what did he know about my heartbreak? How did he know that I would recover? What were his credentials to speak so boldly?

I quickly learned. His wife had died in a car accident thirteen months earlier. They had been looking forward to the birth of their first child.

I asked how it happened. He said it was a head-on crash. The driver of the other car was drunk. “I thought my life was over,” he commented. “I loved her. I still can’t imagine living without her.” He talked about the gentleness of his wife and the anticipation of being a father.

“But you can’t move on,” he commented. “There’s no button to push that cheers you up. You have to absorb all that has happened.” He paused, reflecting on every word. “Sometimes I think you need to feel hopeless before you feel a shred of optimism.”

As I drove home, I recalled his parting words: “It will be difficult. But in time you will get over your heartbreak. And you may discover a beauty about life that you have never known.”

Under any other circumstance I might have dismissed the reassurance. But not after hearing his experience. For everything he shared came straight from the heart.

The following weeks were not easy as I struggled with my feelings of aloneness. I missed my friend’s telephone calls and the exchange of ideas. But most of all I missed the encouragement that he gave to me and so many other people.

Fortunately I had good colleagues who expressed kind thoughts. But I have to tell you this. Deep down inside I wondered whether anybody understood what I was going through. I frankly doubted that anyone could understand in their soul my sense of loss and estrangement.

One day I walked through a large hospital not too far from my home. I saw a man who had lost most of his hair standing by a nursing station. I knew that he had been on chemotherapy.

Then I went by the surgery suite and saw the apprehension in a young man’s eyes as he was being led through the big green doors.

I went by the neonatal unit and saw a two-day-old youngster hooked up to a life-support system. The parents were looking at their child through a glass window. I overheard them talking and I sensed their bravery. But I also sensed that they knew that life could turn against itself.

As I walked through the hospital, I kept asking: How do we survive the injustices that life puts in our path? How do we survive the loss of precious people? How do we cope when a terrifying diagnosis is given? And how can we ever believe in God — or in the goodness of life — when that which makes life so rich and beautiful is suddenly taken from us?

I decided to find out. I visited physicians and psychologists, nurses and chaplains. I asked them what they had learned in helping people through difficult crises.

They were agreed on two points: First, most everyone is changed by a crisis. Second, most people do in fact survive. And often they survive with a new purpose and a new direction. As a psychologist said: “Sometimes the new life is better than the old.”

I agreed with the first point, for I knew that I had already been changed by my friend’s death. But I had some reservations about the optimism. I wasn’t so sure that the new life would be better than the old. I knew it would be different. But better?

I located one hundred and fifteen individuals, each of whom had suffered a severe loss. I asked them to write their stories, for sometimes it is easier to put feelings on paper than it is to discuss them.

Then I selected twenty-five individuals for in-depth oral interviews.

As I listened to their stories, I heard sadness. But I also heard stories of triumph. People rebuilding their lives. Individuals starting over.

Most of all, I learned much about faith. Why people abandon their faith. Why they return to it. And how the substance of faith comforts and sustains when everything seems bleak and hopeless.

After completing the interviews, I decided that I wanted to share with others what I had learned, and that led to the writing of this book. The book is organized as follows.

Section Two focuses on practical strategies for overcoming a heartbreak. We will learn how to take care of our health in a period of much stress. We will learn how families react to a crisis and how to strengthen family relationships during trying times. We will discover the importance of friends and support groups and learn how to select competent professional help. And we will discover why faith is such a powerful force in mending a broken heart.

But we will also learn why it is so difficult to get over a crisis.

Some people do all the right things to recover from a heartbreak. They seek professional help. They join support groups. They pray. They think positive thoughts.

But the pain doesn’t go away.

A surprisingly large number of people think suicidal thoughts after experiencing a heartbreak. In Section Three we will learn what you should do if you feel suicidal. And we will learn how to find comfort when a loved one prematurely ends his or her life.

Finally, we will examine the toughest crisis of them all — death. We will visit a hospice and discover people who die with regrets, bitter about their past and distraught over their future. But we will learn the secrets of those who die peacefully, even when the pain does not let up.

I want to make a promise at the outset of our journey. There will be few platitudes and few pious pronouncements. My own experience with grief suggests that there are few simple answers.

But I am convinced of one thing: People do survive their heartbreaks. It doesn’t happen all at once. In fact, it happens slowly. Gradually. Sometimes in almost undetectable ways.

But if one is patient, the signs of healing begin to be observed. And the prospect of new life starts to unfold.

1. A Gift of Hope: How We Survive Our Tragedies (Paperback or Softback)

Book Description Random House USA Inc, United States, 1996. Paperback. Condition: New. Language: English. Brand new Book. Tragedy is a part of life, a part of the human mystery which we all must face. Here is a moving, beautifully written book from a professor at the Univesity of Minnesota's School of Public Health that will give you the understanding and self-assurance to overcome your own sorrow and begin the process of healing. Seller Inventory # APC9780345410368

Book Description Random House USA Inc, United States, 1996. Paperback. Condition: New. Language: English. Brand new Book. Tragedy is a part of life, a part of the human mystery which we all must face. Here is a moving, beautifully written book from a professor at the Univesity of Minnesota's School of Public Health that will give you the understanding and self-assurance to overcome your own sorrow and begin the process of healing. Seller Inventory # APC9780345410368

5. A Gift of Hope: How We Survive Our Tragedies

Book Description Random House USA Inc, United States, 1996. Paperback. Condition: New. Language: English. Brand new Book. Tragedy is a part of life, a part of the human mystery which we all must face. Here is a moving, beautifully written book from a professor at the Univesity of Minnesota's School of Public Health that will give you the understanding and self-assurance to overcome your own sorrow and begin the process of healing. Seller Inventory # LIE9780345410368

7. A Gift of Hope: How We Survive Our Tragedies

9. A Gift of Hope: How We Survive Our Tragedies