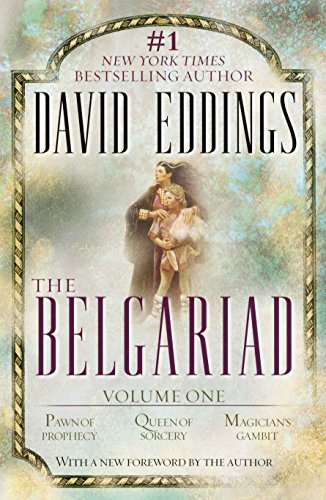 Millions of readers have discovered the magic of David Eddings’ New York Times bestselling series The Belgariad. Now the first three books in this monumental epic appear in a single volume. Here, long-time fans can rediscover the wonder—and the uninitiated can embark upon a thrilling new journey of fantasy and adventure.

It all begins with the theft of the Orb that for so long protected the West from an evil god. As long as the Orb was at Riva, the prophecy went, its people would be safe from this corrupting power. Garion, a simple farm boy, is familiar with the legend of the Orb, but skeptical in matters of magic. Until, through a twist of fate, he learns not only that the story of the Orb is true, but that he must set out on a quest of unparalleled magic and danger to help recover it. For Garion is a child of destiny, and fate itself is leading him far from his home, sweeping him irrevocably toward a distant tower—and a cataclysmic confrontation with a master of the darkest magic.

DAVID EDDINGS published his first novel, High Hunt, in 1973, before turning to the field of fantasy with The Belgariad. He now lives with his wife and collaborator, Leigh, in Nevada. As a writing team, David and Leigh are the authors of The Redemption of Althalus and Regina’s Song.

Ctuchik was deadâ€”and more than deadâ€”and the earth itself heaved and groaned in the aftershock of his destruction. Garion and the others fled down through the dim galleries that honeycombed the swaying basalt pinnacle, with the rocks grinding and cracking about them and fragments shattering away from the ceilings and raining down on them in the darkness. Even as he ran, Garionâ€™s mind jerked and veered, his thoughts tumbling over each other chaotically, stunned out of all coherence by the enormity of what had just happened. Flight was a desperate need, and he fled without thought or even awareness, his running steps as mechanical as his heartbeat.

His ears seemed full of a swelling, exultant song that rang and soared in the vaults of his mind, erasing thought and filling him with stupefied wonder. Through all his confusion, however, he was sharply conscious of the trusting touch of the small hand he held in his. The little boy they had found in Ctuchikâ€™s grim turret ran beside him with the Orb of Aldur clasped tightly to his little chest. Garion knew that it was the Orb that filled his mind with song. It had whispered to him as they had mounted the steps of the turret, and its song had soared as he had entered the room where it had lain. It was the song of the Orb that obliterated all thought shock or the thunderous detonation that had destroyed Ctuchik and tumbled Belgarath across the floor like a rag doll or the deep sullen boom of the earthquake that had followed.

Garion struggled with it as he ran, trying desperately to pull his wits into some kind of order, but the song intruded on his every effort, scattering his mind so that chance impression and random memory fluttered and scurried this way and that and left him to flee without design or direction.

The dank reek of the slave pens lying just beneath the disintegrating city of Rak Cthol came sharply through the shadowy galleries. As if suddenly awakened by that single stimulus, a flood of memories of other smells crashed in on Garionâ€™s consciousnessâ€”the warm smell of fresh-baked bread in Aunt Polâ€™s kitchen back at Faldorâ€™s farm, the salt smell of the sea when they had reached Darine on the north coast of Sendaria on the first leg of their quest for the Orb, the stink of the swamps and jungles of Nyissa, the stomach-turning smell of the burning bodies of the sacrificed slaves in the Temple of Torak which even now shattered and fell in upon itself among the collapsing walls of Rak Cthol. But, oddly, the smell that came sharpest to his confused memory was the sun-warmed scent of Princess Ceâ€™Nedraâ€™s hair.

â€œGarion!â€? Aunt Polâ€™s voice came sharply to him in the near dark through which they ran. â€œWatch where youâ€™re going!â€? And he struggled to pull his mind back from its wandering even as he stumbled over a pile of broken rock where a large stretch of ceiling had fallen to the floor.

The terrified wails of the imprisoned slaves locked in clammy cells rose all around them now, joining in a weird counterharmony with the rumble and boom of earthquake. Other sounds came from the darkness as wellâ€”confused shouts in harshly accented Murgo voices, the lurching stagger of running feet, the clanging of an unlatched iron cell door swinging wildly as the huge rock pinnacle swayed and shuddered and heaved in the surging roll. Dust billowed through the dark caves, a thick, choking rock dust that stung their eyes and made them all cough almost continually as they clambered over the broken rubble.

Garion carefully lifted the trusting little boy over the pile of shattered rock, and the child looked into his face, calm and smiling despite the chaos of noise and stink all around them in the oppressive dimness. He started to set the child down again, but changed his mind. It would be easier and safer to carry the boy. He turned to go on along the passageway, but he recoiled sharply as his foot came down on something soft. He peered at the floor, then felt his stomach suddenly heave with revulsion as he saw that he had stepped on a lifeless human hand protruding from the rockfall.

They ran on through the heaving darkness with the black Murgo robes which had disguised them flapping around their legs and the dust still thick in the air about them.

â€œStop!â€? Relg, the Ulgo zealot, raised his hand and stood with his head cocked to one side, listening intently.

â€œBe still!â€? Relg ordered. â€œIâ€™m trying to listen.â€? Then he shook his head. â€œGo back!â€? he barked, turning quickly and pushing at them. â€œRun!â€?

â€œRun!â€? Relg repeated. â€œThe side of the mountainâ€™s breaking away!â€?

Even as they turned, a new and dreadful creaking roar surrounded them. Screeching in protest, the rock ripped apart with a long, hideous tearing. A sudden flood of light filled the gallery along which they fled as a great crack opened in the side of the basalt peak, widening ponderously as a vast chunk of the mountainside toppled slowly outward to fall to the floor of the wasteland thousands of feet below. The red glow of the new-risen sun was blinding as the dark world of the caves was violently opened, and the great wound in the side of the peak revealed a dozen or more dark openings both above and beneath, where caves suddenly ran out into nothingness.

â€œThere!â€? a shout came from overhead. Garion jerked his head around. Perhaps fifty feet above and out along the sharp angle of the face, a half dozen black-robed Murgos, swords drawn, stood in a cave mouth with the dust billowing about them. One was pointing excitedly at the fleeing fugitives. And then the peak heaved again, and another great slab of rock sheared away, carrying the shrieking Murgos into the abyss beneath.

â€œRun!â€? Relg shouted again, and they all pounded along at his heels, back into the darkness of the shuddering passageway.

â€œStop a minute,â€? Barak gasped, plowing to a sudden halt after they had retreated several hundred yards. â€œLet me get my breath.â€? He lowered Belgarath to the floor, his huge chest heaving.

â€œNo,â€? Barak panted. â€œI can manage all right, Iâ€™m just a little winded.â€? The big man peered around. â€œWhat happened back there? What set all this off?â€?

â€œBelgarath and Ctuchik had a bit of a disagreement,â€? Silk told him with sardonic understatement. â€œIt got a little out of hand toward the end.â€?

â€œWhat happened to Ctuchik?â€? Barak asked, still gasping for breath. â€œI didnâ€™t see anybody else when Mandorallen and I broke into that room.â€?

â€œWe saw no body, my Lady,â€? Mandorallen noted, peering into the darkness with his great broadsword in his hand.

â€œThere wasnâ€™t that much left of him,â€? Silk said.

The Ulgo set the side of his head against the wall of the passageway, listening intently. Then he nodded. â€œFor the moment,â€? he replied.

â€œLetâ€™s stop here for a while then. I want to have a look at my father. Make me some light.â€?

Relg fumbled in the pouches at his belt and mixed the two substances that gave off that faint Ulgo light.

Silk looked curiously at Polgara. â€œWhat really happened?â€? he asked her. â€œDid Belgarath do that to Ctuchik?â€?

She shook her head, her hands lightly touching her fatherâ€™s chest. â€œCtuchik tried to unmake the Orb for some reason,â€? she said. â€œSomething happened to frighten him so much that he forgot the first rule.â€?

A momentary flicker of memory came to Garion as he set the little boy down on his feetâ€”that brief glimpse of Ctuchikâ€™s mind just before the Grolim had spoken the fatal â€œBe Notâ€? that had exploded him into nothingness. Once again he caught that single image that had risen in the High Priestâ€™s mindâ€”the image of himself holding the Orb in his handâ€”and he felt the blind, unreasoning panic the image had caused Ctuchik. Why? Why would that have frightened the Grolim into that deadly mistake? â€œWhat happened to him, Aunt Pol?â€? he asked. For some reason he had to know.

â€œHe no longer exists,â€? she replied. â€œEven the substance that formed him is gone.â€?

â€œThatâ€™s not what I meant,â€? Garion started to object, but Barak was already speaking.