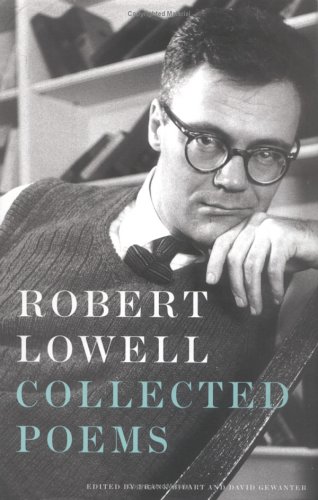 For the first time, the collected poems of America's preeminent postwar poet

Edmund Wilson wrote of Robert Lowell that he was the "only recent American poet--if you don't count Eliot--who writes successfully in the language and cadence and rhyme of the resounding English tradition."
Frank Bidart and David Gewanter have compiled a definitive edition of Lowell's poems, from the early triumph of Lord Weary's Castle, winner of the Pulitzer Prize, to the brilliant willfulness of his Imitations of Sappho, Baudelaire, Rilke, and other masters, to the late spontaneity of his History, winner of another Pulitzer, and of his last book of poems, Day by Day. The book will also include several poems never previously collected, as well as a selection of Lowell's intriguing drafts.

As poet and critic Randall Jarrell said, "You feel before reading any new poem of his the uneasy expectation of perhaps encountering a masterpiece."
Lowell's Collected Poems will offer the first opportunity to view the entire range of his astonishing verse.

Robert Lowell (1917-77) was the renowned and controversial author of many books of poetry, including Day by Day, The Dolphin, and History. FSG also published his Collected Prose in 1987.

One can't help, reading through this massive, spellbinding volume, mourning some of what has been lost in American poetry since the Partisan Review crowd was in the ascendant. Lowell's work evinces a contagious earnestness about writing (and rewriting) poetry in a bid for immortality, and an intellectual aggressiveness that is more ethical than metaphysical in nature (like Auden, Lowell's pacifist politics were often transparent). Lowell's embodied, phantasmagoric sense of history and geography highlights his generation's greater chronological proximity to Pound and, before him, Robert Browning. And the imagistic impulse that fueled much mid-century poetry is best typified by Lowell's unerring sense of visual detail: "...octagonal red tiles,/ sweaty with a secret dank, crummy with ant-stale;/ a Rocky Mountain chaise lounge,/ its legs, shellacked saplings." The greatest misfortune of Lowell's critical reception is that he has been lastingly deemed a confessional poet; as Bidart's closing essay notes, not only did Lowell carefully sift through details to preserve those with greatest aesthetic effect, but these details themselves were sometimes stolen from the lives of his peers. Either way, fans will be delighted to see the full version of The Mills of the Kavanaughs (which was cut down to a handful of stanzas for the Selected Poems) as well as the complete Land of Unlikeness, Lowell's debut which he never allowed to be reprinted. Not enough can be said to encourage the reader to absorb, and even attack, this book. From the earliest poems to several late, unfinished works, Lowell's style-"lurid, rapid, garish, grouped/ heightened from life,/ yet paralyzed by fact"-emerges as a sweeping constant, one that revealingly manages to accommodate successive poetic challenges and misreadings.
Copyright 2003 Reed Business Information, Inc.

Book Description Hardcover. Condition: New. This is a 1st Edition This is a hardcover book with dust jacket. Seller Inventory # mon0000003568

Shipping: US$ 60.98
From United Kingdom to U.S.A.
Destination, rates & speeds