Items related to Father Must: Stories 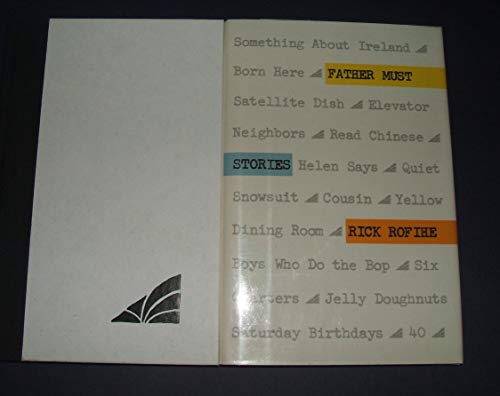 A collection of sixteen stories exploring characters as they move into different worlds, includes tales of new arrivals, surrogate parents, lovers, and others

Half of the 16 stories in this debut volume come with The New Yorker's imprimatur, a few have appeared in Grand Street, and together they testify to Rofihe's range of narrative voices--a dizzying array of ages, races, classes, and genders. For all his apparent multicultural tendencies, Rofihe, in ``Born Here,'' seems to argue for the old-fashioned virtues of Western Civ., as his Puerto Rican narrator teaches himself the Great Books, and determines to learn as much as possible about people unlike himself. The Mexican-born narrator of ``Six Quarters'' repairs engines somewhere in metropolitan New York and matches his catty wife with two stories he tells over and over. In ``Something About Ireland,'' a visitor to New York marvels at his transplanted brother's exploitation of his ethnic charm. The very short ``Read Chinese'' celebrates life in New York's Chinatown. And ``Jelly Doughnuts'' chronicles the strange relationship of a troubled daughter of Holocaust survivors and her inscrutable New England Indian boyfriend. In ``Yellow Dining Room,'' a rare-book dealer affirms the notion that indeed the rich are different than the rest of us; while a New York painter of some renown envies the unusual sensibility of a less successful painter in ``Elevator Neighbors.'' Two stories told from a child's point of view are extremely effective: ``Snowsuit,'' in which a boy's delight in lying in the snow is interrupted by a concerned adult; and ``Saturday Birthdays,'' in which another boy discovers his mother's attractiveness to men. At the other end of the spectrum, ``Satellite Dish'' is the narrative of a grandmother living on her family's farm who allows her son to chop down a beloved elm in order to improve TV reception. In the title piece, a thirtysomething alcoholic must decide what his girlfriend's son should call him. Also offbeat is ``Quiet,'' the thoughts of a deaf violinist as she contemplates marriage and music. The remaining bits veer from the elliptical to the obscure, and confirm this collection's quirkiness. Confident in his reach, Rofihe disorients as much as he dazzles. -- Copyright ©1991, Kirkus Associates, LP. All rights reserved.

The proof of true mastery is making what's difficult look easy. Rofihe writes mostly in the first person but moves with grace and ease among markedly different protagonists: the son of Puerto Rican immigrants, a hearing-impaired violinist, an old woman watching her world change, a visitor from Ireland, an artist. He has a real knack for getting into someone else's head and telling a convincing story in that person's own words. Instead of playing the puppet master, he becomes the puppet itself, breathing life into each character. Although half these stories are only two to eight pages long, they are rich in detail, nuance, and feeling. None stands out from the rest since each is a separate gem in its own modest way. Eight were published in The New Yorker and the title story appeared in The Best American Short Stories, 1989 ( LJ 10/15/89). Highly recommended for public and academic libraries.
- Jim Dwyer, California State Univ. at Chico
Copyright 1991 Reed Business Information, Inc.